The prince and I Prince was ‘very tall and handsome’ 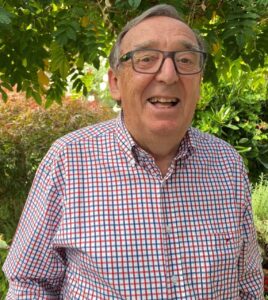 Retired Masterton businessman and newspaper columnist Rick Long vividly remembers the day he met Prince Philip in Masterton on a hot summer day over 67 years ago.

The then-13-year-old Long, now 80, was one of a group of Boy Scouts chosen to stand front and centre to welcome the Queen and Duke of Edinburgh when they spent the day in town on Friday, January 15, 1954.

Although a photo of the occasion, including the prince and Long, had appeared in the Auckland Weekly, Long had never seen it.

With the help of Wairarapa Archive’s Gareth Winter, the Times-Age was able to find a copy of the picture and show it to Long.

“That’s me all right,” Long said, commenting on how short he’d been at the time.

“I heard about it from a number of people who said they’d seen my picture. We didn’t get the Auckland Weekly, but my aunt did. I went down to my aunt’s place, but she didn’t have it anymore.

“I never ever got to see it and was quite disappointed. So now I’ve seen it.”

Long said almost the whole town had turned out to welcome the young and glamorous royal couple.

“It was an interesting day. All the dignitaries in town were presented to the Queen and duke by the mayor. They all had to walk up steps on to the dais, which had a cover over it.

“There were a whole lot of Scout troops there. We were pretty excited. It was a big thing to do and we certainly had front row seats.

“It was a lovely hot summer’s day. There was a huge crowd, almost everyone in Masterton must have been there. There would have been around six thousand people there. It was a thoroughly enjoyable day for everybody. He estimated about 6000 people lined the streets.

Long and his fellow Scouts stood in front of the guide rope right next to the red carpet with a throng of eager townsfolk behind them – all hoping for a glimpse of the couple.

Prince Philip stopped to talk to Long and a fellow Scout.

“He came over and said to the two of us ‘you boys aren’t holding the crowd back, there’s a rope between you’. He leaned over and grabbed the rope, with a smile on his face.

“I wish I’d been smart enough to come back with a response, but we were so overwhelmed by the prince actually talking to us that I was tongue-tied.

“He was very tall and handsome. They were an attractive couple, and he was very friendly and had a lovely smile. Everybody loved them both, of course. They were very, very popular.”

Long recalled a funny moment during the visit. The royal couple had lunch at the now-demolished Empire Hotel, where Big Save Furniture was today. The butcher next door, CL Neate Ltd, provided the meat for the meal.

“Afterwards, Mr Neate came out and wrote on his window ‘The Queen ate our meat’.

“My father’s butcher shop was just around the corner in Lincoln Rd. My Father, quick as a flash, came out and wrote on our window 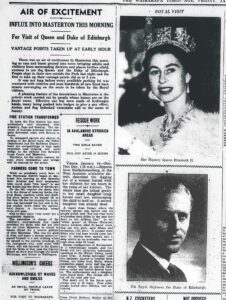 That story made the national news.

The visit was covered extensively in the Times-Age. Under the heading ‘Air of Excitement’, the paper described how people had camped out on the streets the night before.

“Towns and buses poured into town bringing adults and children from surrounding districts and further afield. People slept in their cars outside the park last night and the first to take up their vantage points did so at 3am.

“Work on practically every farm in the Wairarapa district began at day-break this morning so that farmers, their families and their employees could later come ‘into town’ to see the Queen and the Duke of Edinburgh,” the January 15, 1954, edition read.

The next day, the Times-Age described the cheering crowds.

“As her Majesty and the Duke left the Empire Hotel to enter the royal car there was a great roar of greeting from the people who had waited in intermittent rain to farewell the royal couple.”