The Italian job – no pain, no grain When Alastair Orsborn, of Sharpes Stock Feeds in Carterton, first approached an Italian engineering firm about a new packing plant, he never imagined he and son Sam would be tasked with putting it together over Skype in the middle of a pandemic.

It’s been a project many years in the making.

Alastair, the second-generation of the family behind Sharpes Stock Feeds, first approached the family-owned mechanical engineering business Concetti, based in Umbria, in central Italy, 30 years ago.

He visited the factory site again last August to sign the contract.

The giant bit of equipment arrived in a series of approximately 12 metre containers but the team of Italian engineers who built the plant were unable to make it out to assemble it due to the border closure.

Coming into the busiest time of year between July and January, the Orsborn’s couldn’t wait so did what many others were doing and headed online.

They painstakingly put the plant together over three weeks while talking to the engineers over Whatsapp and Skype each night between 6pm and midnight.

Sam said they called on Google Translate to help explain where some of the parts fitted.

“Excellent-o – that’s how we thought we’d communicate by adding an ‘o’ at the end.”

Thankfully, they also had the help of local woman Lucia Zanmonti who moved over from Vicenza, in the north east of Italy, about 14 years ago.

The father and son also had help with the electronic configuring of the packing line, Alastair said.

“One of the big things with this, and the reason we could proceed with the install, was we found a local chap who developed packing plants mainly for milk products.

“The physical thing was really Sam and I. He was the electronic side of things.” 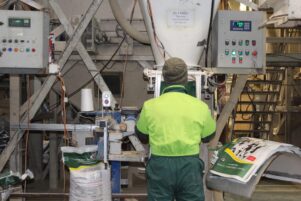 Before: They could produce around six tonnes an hour, but the new plant means they can produce 18 tonnes with a third of the labour.

Alastair said it all fitted together quite logically.

“This particular one has never been built before,” he said.

“The components are regular, but the configuration is unique.

“It was actually quite a fun project, right up until it came time to test it out. It was fun right up until you turn the switch on when you realise it’s a very serious project.”

The Italians were safety conscious about the first test and making sure everything was ready to go.

“You put a bag in at one end and end up with a fully wrapped pallet.”

The packing plant is comprised of three main sections – bagging the feed, placing it on a pallet and wrapping the pallet. 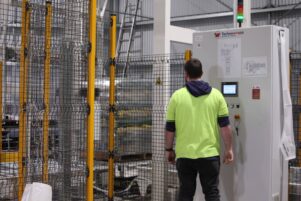 After: Alastair Orsborn says you “put a bag in at one end and end up with a fully wrapped pallet”.

A computerised batching plant was installed to increase rations in 1991 and a second production line in 2006, which allowed Sharpes to produce two separate lines of feed – one for monogastric animals, like pig and poultry, and another for ruminant animals.

Sam credits this “big call” to his dad.

“It means we can produce calf and stock feeds, and pig and poultry feeds, under the same roof.”

The new fully automated plant also has two separate feed lines and is being marketed as the “Gemini’.

It is programmed to pick up a bag, paper or plastic and of varying sizes, and then fill them with a pre-weighed amount of product before sealing the bag using a heat sealant or sewing machine.

Forty of these bags are then placed neatly on a pallet which is then shrink wrapped to make it fully waterproof.

Sam said the new technology allowed them to produce “three times as fast with a third of the labour”.

They’ve gone from producing about six tonnes of product an hour, to 18 tonnes.

There have been other efficiencies and environmental savings, with the new shrink wrap system reducing the amount of plastic used by about 50 per cent.

Being fully automated and enclosed in a cage, the new plant has also improved health and safety.

When the cage door opens, or an object crosses through laser beams, the whole operation comes to a halt.

There are also emergency stop buttons every three or so metres around the exterior of the plant.

However, the best thing about it was the ability to play with pack sizes and products, Sam said.

“At the time it seems like overkill – you think it’s far too much, far too big – but you always grow into it.”

Sam said his kids, who lived at the family farm next door, had been intrigued watching it all come together.

“It’s the next generation. The potential is there.”

Alastair said the secret was to “bite off more than you can chew, and then chew like hell”.