The industrious world of the Men’s Shed Blokes getting stuff done together

Like a good timber tree, the Henley Men’s Shed has grown since it was planted on Colombo Rd about 11 years ago. September 28 to October 3 is Men’s Shed Week. Midweek reporter Eli Hill paid a visit to find out what really goes on in a Men’s Shed. A wall of power tools at the Henley Men’s Shed. PHOTOS/ELI HILL

Our tour guide into the world of the Henley Men’s Shed wears a purple high-vis vest with the words “Ask the boss” on it.

When we arrive, we find him stacking lengths of plywood with three other guys.

His name is John Bush – he’s the co-ordinator and manager for the Henley Men’s Shed.

John sits us down at a timber picnic table, he taps his hand on the wood and informs us that the same tables are sitting at Solway School, Rathkeale College, and Ponatahi Christian School.

While a lot of Men’s Sheds started off with just woodworking facilities, the shed at Henley has grown to include metalwork and engineering, cooking, multimedia, laser cutting, gardening, and health facilities.

As John points out – it even has a pizza oven.

“We just have pizza lunch days for the hell of it. We email out to the guys that Wednesday next week will be pizza lunch.”

While the pizzas are great, John says research shows the biggest attraction for the Men’s Shed is the camaraderie.

“It’s that fellowship. If you look at our total membership, 85 per cent of them are retired.

“So, they used to go to work at a factory or an industry or wherever, they had workmates, they had structure, they worked from 8am to 5pm or whatever.”

But without work, many men lack structure and find it hard to fill their days.

“There’s a big push for blokes to have some structure, and that comes from the hours that the shed is open. 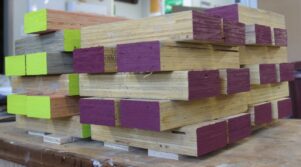 Jenga blocks made by the Men’s Shed.

“They get some new workmates, blokes that can carry on conversations that they used to have at work and they can be productive – as in mental and physical stimulating conversations and projects – thinking how can we get together and come up with an answer and stuff.”

Among the men are plenty of retired experts in a variety of fields.

“So, a bloke raises a question today – it might be about prostate cancer. He says ‘I got my latest PSA [Prostate-Specific Antigen] result back and it’s jumped up four points. Is that good or is that bad?’”

“Who do you talk to? How about the three doctors here?”

And as a result, the men get a free consult.

“But you won’t get it one on one. They’ll discuss it around the kitchen table – 20 blokes talking about this guy’s PSA reading, and what it means.”

The next day, someone might have trouble uploading pictures of their grandkids.

“One of the computer tutors comes in and says, right we can help with that.

“It’s all about this trading off. “Today I’m helping you, tomorrow you’re helping someone else, every day this is going on.”

From behind John comes the sound of an electric sander – he turns his head, and asks if we want to go in.

The reassuring smell of wood greets us as we go through the door.

To our left and right are displays holding birdhouses, tui feeders, wooden dogs, a highchair, and all sorts of wooden trucks, helicopters, and miniature furniture.

Small teams of older men gather around projects in twos and threes.

John tells us that the shed has 144 members.

“A lot of men’s sheds just started off as a woodworking shop, and that was something a typical bloke in New Zealand was pretty happy with, they had a chisel and that sort of thing around home.

“Today’s environment is quite different, the DIY-DNA thing has been removed by legislation.

“You’ve got the health and safety act which means they’re no longer allowed to do certain things on their home.

“They have to bring a tradesman to do that so it’s down-skilling the dads from teaching the kids around the house.”

The Men’s Shed does plenty of “intergenerational mentoring”.

“We’re getting kids in – a number of them from solo parent families, and these kids have no idea about the tools … and these are basic tools. The Men’s Shed isn’t missing out on 21st century tools – pictured is a laser engraver.

“But we get fantastic feedback from mums in particular. They’ll say ‘he’s coming home and he’s talking about these tools, or the girls talk about this or that and they would’ve never got this experience in today’s environment and you guys do such a fantastic job’.”

Some of the programmes run for four days and John says the children achieve a lot.

“The guys are [exhausted] at the end. But for the next two weeks they talk about “My team, and what we built, and the fun that we had’. It’s like a de-facto grandchild.”

John leads us through the woodworking section, and past lathes where bowls and an umbrella handle are being turned.

Beside it is a room with little cubbyholes filled with power tools, then a metalwork workshop.

We follow the sounds of the electric sander until we see the Tinui Church steeple which is in the middle of being refurbished.

“Our funders said, ‘If we give you some money, how widely does that filter out into the community?’” John says.

“And so, we sat down with our photo album and going back to day one, week one, we asked ourselves what projects were we doing?

Today the shed keeps a record – it has helped more than 135 clubs, groups, and organisations in some way, whether it be flag poles, picnic tables, or games of jenga.

The shed uses donated wood from construction site offcuts and waste for projects for kindergarten and hospice.

“It means they’re not paying anything for materials, they don’t pay us anything for labour so if we’ve got glue and screws, they’ll reimburse us for that.”

John reckons that pretty much every kindergarten and rest home in the area has a set of Men’s Shed-made jenga blocks. [Pictured and below]
A selection of handmade crafts at the Henley Men’s Shed shop.

Not far from the steeple is a handmade coffin with a name already on it, John tells us that the guys plan to use it.

“This is the fun thing – we talk about health and all that, the guys openly talk about it and laugh about really serious sh**.

“Some people are really sensitive about it, but around here the guys are really good about it. They’ll say we have to put a clipboard on the end [of the coffin] and have a waiting list.”

The men have a conference room with a TV, computer, and projector – every Thursday it’s used for chess and cards, other times All Black matches or America’s Cup races are played on the big screen.

“We also have men’s health sessions in here once a month. We talk about diabetes, arthritis, you name it, we’ll talk about it.

“We either use one of our retired health professionals, or we’ve got two Otago University medical students who come and give a talk to us.”

The room is also used for presentations, and a writer’s group. “This is older blokes sitting down, reading about a story that happened in their life. It’s not always fun – it can be serious or sad. But it’s just a little snapshot and they read it out.

“Others who sit in on the group might be reminded about something that went on in their life and they’ll write something.”

The men’s stories are put into a folder which is eventually handed on to the grandchildren.

“They’ll say this is your grandad and the mischief he used to get up to.”

The conference room is also home to a computer-aided laser engraver.

“This is older blokes saying, ‘in today’s world of industry they’re getting all these new tools and gadgets to work with, would we be able to learn what to do with this’?”

John points to the kitchen and tells us about the cooking and baking lessons that go on.

“At random, we have blokes who bake muffins and scones and pikelets and stuff. Most mornings there’s morning tea on the table.

“Our most extravagant baker does custard squares; he was a pastry chef so that’s his forte. Other blokes say – I wouldn’t mind having a go at scones and muffins.”

John segues into the story of a guy whose wife had come to an open day.

“In one of our scrapbooks there’s a photo of a guy with a mixing bowl mixing stuff and she said – is that my husband? What’s he doing? The bastard, he won’t come near the kitchen.

“For him – the kitchen’s her domain, but in the Men’s Shed all barriers are gone.”

From September 28 to October 3 is Men’s Shed Week.