Lily Hambrook’s grave marker lying on the ground before it was stolen. PHOTOS/SUPPLIED

For more than 130 years, a wooden board has marked the resting place of a young woman buried in Masterton’s Archer St cemetery. Recently it was removed from the old section of the cemetery and discarded in the Queen Elizabeth Park car park. Gareth Winter from the Wairarapa Archive explains how the marker was identified, and the tragic stories that lie behind it.

There are not many wooden markers left in the Archer St cemetery. Although they would once have been common, they have largely eroded and been removed.

The one that was found had no name on it but was recognisable as having been just along the row from another of the few wooden markers remaining, that of Maggie Tait.

Lily was the daughter of George Hambrook and his wife Harriett Ann Gough. They were married in 1860 in Wellington, George having arrived in the country six years earlier from Melbourne.

He had an interest in Wairarapa, as he is listed as a member of the Small Farms Association and drawing a section in Greytown in 1861.

By the late 1870s, the family moved north, and the children, including Lily, were enrolled at Carterton School, but by the mid-1880s they were at Tutaekara, a rural area near Eketahuna.

It seems Lily became pregnant in late 1885, giving birth to an illegitimate daughter, Alice Smith Hambrook, in late July 1886. The baby died on August 11 and was buried in a graveside service by the Anglican minister.

Lily died eight days later, her funeral cortege leaving the house of George Haskell before a service at the cemetery, this time conducted by the Methodist minister.

Lily’s parents placed an advertisement in the newspaper announcing Lily’s death and inviting their friends to join them in the service.

Later they erected a wooden marker on Lily’s grave, although Alice’s remained unmarked and no notice of the death of their granddaughter was placed.

The Hambrooks were to undergo a trying time in the years ahead. In 1890 one of their neighbours at Tutaekara, Anthony Klaiser, who was in the habit of buying meat from them, had not come out of the forest for three weeks, so George Hambrook went searching for him and found him dead. A tree he was felling had fallen on him, severing his head.

In 1893 the Hambrooks were back in the news in a most sensational manner.

Two years previously, George had employed a man called William Joseph Aldridge, alias Smith, and his mate, Jacob Jacobsen, to do some forest clearance work on his section.

After two days, Aldridge had said he could not stand the place and asked if he could leave.

Hambrook agreed, and asked after Jacobsen. Aldridge said he had left the day before.

It became evident that something had happened to Jacobsen – police searched in vain for him. Some badly scorched bones were found in the burning stump of a rata tree, and suspicion fell on Aldridge.

He could not be located either, although there was a rumour he had decamped to Victoria, Australia. He was eventually located in Melbourne, and in April 1893 returned to face justice in a murder trial in New Zealand.

After days of court time, including evidence from George Hambrook and his son William, the case was dismissed.

Four years later, the family were back in the headlines, again for all the wrong reasons.

George and Harriett’s son, William, who had returned to the Nelson area to work as a miner, had a quarrel with Henry McKenna, a fellow young single man. A fight ensued and McKenna suffered a fatal injury.

The matter went to a Supreme Court hearing but the grand jury decided there was no case to answer and William Hambrook was set free.

He later shifted to Otaki, where he was joined by George and Harriett, who died there in 1903 and 1914 respectively.

They are buried in Otaki, away from their daughter and granddaughter in Masterton. 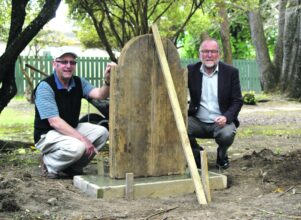 Gareth Winter with Roger Hoar of Headstones Wairarapa who restored the grave marker in time for NZ Cemeteries and Crematoria Week which started on Saturday.

The combined efforts of Wairarapa Archive’s Gareth Winter and Headstones Wairarapa staff has meant a wooden grave marker, stolen from the Archer St cemetery a month ago, has been researched, repaired, and reinstated in time for NZ Cemeteries and Crematoria Week which started on Saturday and continues through until next Saturday.

The marker was found abandoned in the car park at Queen Elizabeth Park, broken in two pieces.

The lettering had disappeared from the grave and it was unidentifiable.

Winter was able to say where it had been removed from.

“There are not many wooden markers left in the cemetery, and when I saw it I recognised it as one that had been lying face down in the soil.

“I was able to work out from the burial register that it belonged to an 18-year-old girl from the Eketahuna area named Lily Hambrook, and that she died in 1886.”

When Roger and Peter Hoar from Headstones Wairarapa heard about the discovery they offered to repair and re-erect the marker board, and to erect a new plaque with Lily’s name on it.

They have joined the broken pieces of the marker together again, and set it back up on a concrete plinth.

“It turns out that the unmarked grave next to Lily’s is her illegitimate daughter Alice, who died aged 18 days, a few days before Lily.

“The new plaque that Wairarapa Headstones have made will record both these young people.”

“I did find one extraordinary thing.

“The Hambrook family came from England, and were living in the Nelson area before shifting to Wairarapa in the late 1870s.

“I discovered that Lily had relatives who continued to live in the Nelson area, and that one of her cousins married my grandfather’s cousin.

To celebrate NZ Cemeteries and Crematoria Week, which has councils across New Zealand holding events to celebrate the vital role cemeteries and crematoria play in our cities and communities, the Wairarapa-Times Age will be running a story about a grave in Archer Street each day.