Vaping is becoming a ‘big issue’ for Wairarapa youth. PHOTO/STOCK.ADOBE.COM

With the passing of the Environments and Regulated Products [Vaping] Amendment Bill imminent, the mood on the street is that vaping is harmful, pointless, and is becoming a big issue in Wairarapa schools.

The bill passed its second reading in Parliament at 11pm on Thursday and is set to be passed under urgency in the last sitting days before Parliament adjourns for the general election.

The bill bans the sale of vaping products to those under the age of 18 and also prohibits advertising the products, restricts the sale of specific flavours to R18 specialty stores, and introduces a safety system which would allow the Ministry of Health to recall products, suspend them and issue warnings.

As it stands, general and online-only vape retailers will be permitted to sell just three vape flavours – mint, menthol, and tobacco.

Wairarapa quit smoking coach Nicola Jackson, who works at Whaiora, said she had received feedback from schools that vaping had become “a big issue”.

“Rangatahi [youth] like the sweet flavours and the look of the vape … It seems to have a wider appeal than smoking.”

She said research had shown that vaping had increased in young people, including in those who had never smoked cigarettes.

“There’s the concern that youth will become addicted to nicotine if they are purchasing nicotine containing vape liquids – hopefully the new legislation will help protect youth from taking up vaping and stop the increasing trend currently seen.”

She said some smokers had found vaping useful in quitting smoking, but others hadn’t.

“We don’t provide vapes in our service, but do provide NRT [patches, gums, lozenges].

“However, if people choose to vape to quit, or use other stop smoking medications, we still support them on our programme – the coaching and support can really improve success rates in stopping smoking.”

In terms of the bill, Jackson said the legislation was needed for safety “and to protect youth and non-smokers from taking it up” because the industry was so unregulated.

“There have been no product safety requirements, no restrictions around marketing, and there is lack of clarity about sales of vaping products to under-18s.

“This has been covered off in the legislation, as well as other important changes.”

The Irresistible Vape Shop in Masterton runs within the laws around sales of tobacco and owner Johnny Meeuws said he was glad some regulations were coming in.

He would be applying to be a specialist outlet that would be able to sell more specialist products than supermarkets and dairies for example.

He gave up smoking using vapes and now only has a small amount of nicotine in his vape.

He said when people were puffing out a lot of vapour, they should use common sense about where they were doing this and be considerate to others. 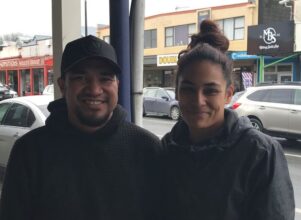 Wiremu and Rina Rameka are not keen on vaping. PHOTO/KAREN COLTMAN

A Greytown couple, one of whom smokes, are anti-vaping but for different reasons.

Wiremu Rameka said it was bad to take flavoured steam into your body and then have the chemicals solidify inside.

“I have vaped, and I have smoked. I didn’t find that vaping stopped me smoking,” he said.

“I just went back and forth from vapes to tobacco.

“But it is something that just popped up and was offered as a way to stop smoking and we really don’t know enough about it and there seems to be no rules around it,” he said.

“The chemicals in them and the colourings inhaled have got to be bad for you and the strawberry flavour encourages kids to smoke.”

Most thought the flavours without nicotine could help start up a pattern of smoking generally.

About 90 per cent of e-liquids sold for vapes are flavoured.

Catherine van Dorp of Carterton, 80, said no alternative to smoking that is an action like smoking will break a habit.

She said addictions could only be stopped with determination.

“Only willpower works to stop these habits that have a negative effect on mental health,” van Dorp said.

Under the Smoke-Free Environments Act, smoking is prohibited in indoor workplaces, at early childhood centres and schools but vaping is allowed in these places.

Vaping will be banned should the legislation be passed.