Jonty Roubos [centre] had an industrious game in the 0-1 loss to Olympic. PHOTOS/FILE

There were plenty of positives for Trust House Wairarapa United, who were reduced to 10 men for more than 60 minutes in their 0-1 loss away to Wellington Olympic on Friday.

United went behind after 11 minutes when Olympic’s talisman Mario Barcia hit a screamer from about 30m.

“The goal they scored was just unstoppable, and [goalkeeper] Scott [Morris] never had a show,” United coach Phil Keinzley said.

“It was one of those goals you might score every three or four years.”

If the task ahead of the visitors wasn’t already tough enough, going a goal down against a confident Olympic side comprising many Team Wellington players, who last month won the National League, it became almost impossible when United were reduced to 10 men.

Midfielder Cory Chettleburgh’s poor discipline again proved costly as he was sent off for two yellow cards, the first for shirt pulling and the second in an incident where the freekick could have gone either way.

Chettleburgh has a long history of red cards, and Keinzley will need to have strong words with the experienced campaigner to avoid any further indiscretions with clubs likely to target him, as Olympic did.

In recent seasons a 10-man United would have crumbled, but this team are made of sterner stuff. They lifted their performance to deny the home side scoring opportunities.

Olympic had possession for long periods, but United contained their dangerous attackers and even created their own scoring opportunities.

“Both teams had about equal opportunities, and we had a couple of freekicks . Hugo [Delhommelle] put them on target, but they weren’t well struck,” Keinzley said.

“Jared Cunniff just ran himself into the ground, and Jonty Roubos had a huge work rate and never gave up, despite not seeing much ball.”

Keinzley said the result against an almost entire side of Team Wellington players had given the team real self-belief.

“You can see now the expectation that they have on themselves, and they were annoyed not to win, even though we only had 10 players. “

“I thought after that comeback last week after being down two goals [to Petone and winning 4-2] and now this, the team are probably already showing that they’ve got more backbone than some teams I’ve coached – I would put it up there in the top three for determination already.”

United are fifth in the Central League after two rounds. Their next outing is a home fixture on Saturday against early leaders Napier City Rovers, who have won both their games. 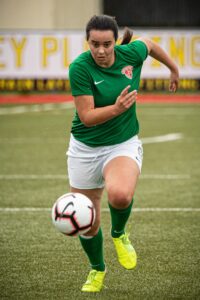 Tumu ITM Wairarapa United completed their preseason on Saturday with a convincing 4-0 win over Petone in the Kelly Cup Plate final.

All goals came in the first half, with Kelsi Rutene, Kennedy Bryant [2], and TJ Lyne-Lewis finding the back of the net.

United coach Paul Ifill was satisfied with the result and felt his team controlled the game with a lot of confidence.

“We played really well and were 4-0 up at halftime, but it could have been more,” he said.

“The second half was a bit of a damp squib really.

“I thought Petone might come out and really press to get back in the game, but they didn’t, so I think they didn’t want to get beaten by any more.

“We managed it well and kept a clean sheet – so all in all, I’m pretty pleased.”

Ifill said the win gave a good indication of how the team was placed. He said they would be pushing for a top two finish in the W-League with Palmerston North Marist, Waterside-Karori three-time defending champions Wellington United Diamonds.

United kick off their W-League campaign on Saturday at home to Victoria University.