At just 19 years old, Masterton’s Mere Kawana is a mum and a domestic violence survivor.

And she doesn’t know where she would be today if it weren’t for the Wairarapa Teen Parent Unit, and the blessing of her son TJ, now two years old.

“I take my baby as a second chance.

“I take it as an opportunity to fix myself and everything that has come my way.”

Mere dropped out of Makoura College at the age of 15.

Within a year, she became pregnant – she had just split up with her son’s dad when she found out and was in the middle of a visit to Tauranga to be with her biological dad.

“I had an inkling I was pregnant, but I hid it from everyone and went away.

“I eventually came out and told my mum, look I think I’m pregnant.

“We took a test and that came back negative.

“A couple days passed and I took another one and it came back positive. 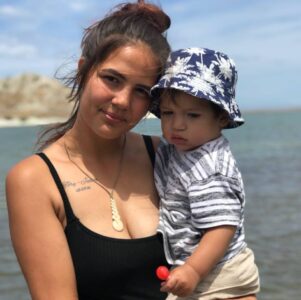 Thankfully she was given support by her family, although, at the time, she said her biological dad’s side of the family encouraged her to have an abortion.

“They were trying to tell me it [having a baby] was going to ruin my life.

“Nowadays, they can’t stop apologising and telling me how proud they are of me.

“It was hard being pregnant because I was quite young and people were quite judgemental to talk to about the situation.

“My son’s dad wasn’t really around – he was always back and forth between places.”

A week after giving birth to TJ, Mere said she was involved in a domestic incident.

“I’m a survivor of domestic violence.

“I just still had it stuck in my head that I wanted the perfect family and I tried to make it work.

“I wanted my son to have a dad.

“I didn’t want to be known as the single mum that didn’t do anything with her life.

“After a while, he kept showing that it wasn’t going to happen.”

She said the domestic violence continued, amid other hardships, including the death of a high school friend, the death of her grandad, her grandmother’s cancer diagnosis, and being assaulted by a close friend’s relative.

And if it wasn’t for the support from her family and the Wairarapa Teen Parent Unit, Mere said she wouldn’t know where she would be today.

She is no longer in a violent relationship.

“If it wasn’t for these guys here, I wouldn’t have been sent down that right path,” Mere said.

“There’s quite a lot of girls that relate to that situation.

“It may not be to the extent of getting hurt, but the words hurt just as much.”

When Mere started with the unit, located in Masterton on the campus of Makoura College, she had no qualifications and was “pretty shy”.

“I started off with no qualifications at all, no NCEA.

Over the past few months, Mere has been deciding between pursuing youth work or teaching.

She has finished a placement at Masterton Intermediate School.

“It’s been a bumpy road this whole thing – I had a lot of ups and downs and there were some rough patches, but I managed to pull myself out.”

The best part about being a mum was “the cuddles, the love, and the laughs”, Mere said.

“It feels like TJ has been in my life forever – not just the past two years.

“I couldn’t imagine not having him by my side every day.”

Mere said she enjoyed sharing her story “because it is one of success now”.

“When people try to laugh in my face about becoming a mum at 16, I tell them, my baby saved my life.

“It’s the best thing that ever happened to me and I’ll forever be grateful.

“And I’ll make sure he knows that one day too.”