Teachers Brodie and Tracy Wilson and their five-year-old daughter Winnie will return home to Carterton after a two-week stay in MIQ. PHOTOS/SUPPLIED

A teaching couple stuck in Brunei have had a roller coaster ride trying to return to New Zealand since borders closed last year.

After months of failed attempts to secure spaces in a managed isolation facility, Brodie and Tracy Wilson and their five-year-old daughter, Winnie, will finally return to Brodie’s hometown of Carterton in December.

Although they considered themselves lucky, the family knew that many others were not so fortunate.

“I got the spot, and I was so happy,” Brodie Wilson said. “Then I got this instant feeling of guilt because while we’re happy for ourselves, thousands of others may be in a worse situation, and they are still stuck.” 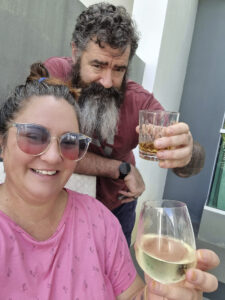 Brodie and Tracy Wilson toast to returning home at the end of the year.

The family would spend two weeks in a managed isolation facility from November 27 before returning to Wilson’s mother’s house in Carterton.

About 20 other New Zealand teachers and their families would remain in Brunei, unsuccessful in securing a class border exception earlier in the year.

The Wilsons relocated four years ago to teach English to underprivileged students.

In March 2020, the family was in Thailand on school holidays.

“Our whole point of coming overseas to work was that we could travel and show our daughter the world,” Wilson said.

Halfway through the holiday, he received a call telling him to return to Brunei immediately.

“Since that day, the borders haven’t opened here.”

When New Zealand’s managed isolation and quarantine [MIQ] facilities started operating, Wilson assumed they would keep up with demand.

“It was taken for granted that we’d be able to get home when we needed to.”

However, with his work visa expiring and teaching contract ending in December, he grew more desperate to get home.

Securing a room became an obsession.

Brodie called the system a “lottery.”

“In the back of my mind, I’ve always believed in what the Government has been trying to achieve, which is safety for all New Zealanders … but in the front of my mind, I wanted to get my family home.”

Unsuccessful in the first few room releases, Wilson sent emails to the Prime Minister, the Ministry of Education, the Ministry of Business, Innovation, and Employment, the Ombudsman – even the United Nations.

He asked the MoE whether a successful application could earn him a border exception.

The exceptions team told him that Pirinoa did not meet the eligibility criteria: the school’s decile was too high, and it was “not hard to staff.”

However, Pirinoa School principal Gene Moore said he had struggled to attract staff to the school.

The position had attracted just two applicants. Both were from India and were not New Zealand qualified teachers.

“They know that we are short-staffed for teachers over here, so they’re trying to get a foot in the door,” Moore said.

He said the fixed-term nature of the job had likely deterred some applicants. Unable to predict their roll, Pirinoa could not guarantee the position for longer than one year.

The school’s location also put some people off.

“We are 20 minutes from Martinborough, but two 20-minute trips a day does add up.”

“What you’re saying is you’re going to bring 300 foreigners and give them an MIQ space in front of 30,000 New Zealanders who are trying to get home. That didn’t make sense to me,” Wilson said.

Having exhausted all of his other options, finally, in a room release on Tuesday, September 28, Wilson secured a space in MIQ: number 1106 out of 3718.

“As soon as that number popped up on the screen, I was jumping around the room. I was screaming because I knew we were coming home.”

Despite his excitement, Wilson said he would continue to fight for people stuck in nations where covid-19 cases were rising.