Ross Taylor bats during day four of the second 2015 test match between Australia and New Zealand at the WACA in Perth.Today, he plays his 100th test at the Basin Reserve against India. PHOTO/GETTY IMAGES

Former New Zealand international Mark ‘Paddy’ Greatbatch often tells a story about a six-year-old boy coming up to him at a Central Districts game on Queen Elizabeth Park in November 1991 and telling him that he was going to play for New Zealand.

Twenty-eight years and a few months later, that little boy, Ross Taylor, will walk on to the hallowed turf of the Basin Reserve for his 100th test.

Of course, that wasn’t Paddy’s only involvement with a young Taylor.

That caused much angst in the Wairarapa cricket community, but in hindsight, it was a necessary move to develop Taylor’s undoubted natural ability.

In the end, it was a family decision and not one made by big brother at Central Districts Cricket. 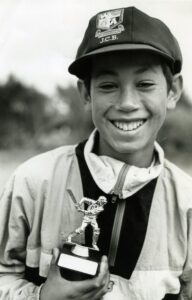 Taylor had played one or two representative games for Wairarapa as a Wairarapa College student but lacked the specialised coaching to hone his skills.

Despite not having lived in the region for two decades, Taylor remains fiercely parochial to Wairarapa and his beloved Lansdowne Cricket Club, and still calls Masterton home.

He has provided shirts, caps, bats, and other mementoes for fundraising auctions and events, and once donated the $500 he received for an ODI Man of the Match award to Lansdowne.

Although there was no official Wairarapa Cricket or Lansdowne presence at the Basin Reserve yesterday, there is sure to be a big local attendance and going on past experiences they will make it known they are there, cheering every run and every piece of fielding by Taylor.

Let’s hope Taylor does better in his milestone test than the three other Black Caps who have achieved the feat.

Stephen Fleming was dismissed for a fifth ball duck and only scored six in the second innings in a 128-run loss to South Africa at Centurion, Pretoria.

Brendon McCullum lasted two balls more than Fleming in being dismissed for a duck in the first innings and then scoring 10 in the second innings in an embarrassing innings and 52-run loss to Australia at the Basin Reserve in 2016.

Daniel Vettori fared best with 41 in his only turn at bat in a drawn test with India in Ahmedabad in 2010.

No doubt speculation on when Taylor will retire is growing, but he has openly indicated that is not on the horizon.

And of course, there will be the obvious discussions and debates in the pub on where Taylor sits among New Zealand cricket greats.

To me, he’s right up there with the very best. Nineteen test centuries, with a top score of 290 against Australia in Perth in 2015, says it all.

In my best ever team, Taylor sits nicely at number four with his great friend and mentor, the late Martin Crowe, at number five.

His best innings, in my modest opinion, was his second test century, 154 not out against England at Old Trafford, Manchester in 2008.

Luteru Ross Poutoa Lote Taylor, all Wairarapa salutes you for a great innings. Long may it continue.