Bangladesh players give Ross Taylor a guard of honour as he walks out to bat for the last time in test cricket. PHOTO/GETTY IMAGES

What was Ross Taylor’s last act in test cricket?

That will make a great pub quiz question in the future.

By the way if you don’t know the answer, Wairarapa’s favourite son’s final act was to take the last wicket at Hagley Oval, Christchurch, on Tuesday to seal a comprehensive victory over Bangladesh.

That took his tally to three wickets, at an average of 16, and he joined greats Sir Richard Hadlee, Glenn McGrath, and Muttiah Muralitharan in taking the last wicket in an innings with their last delivery in test cricket.

There is the small matter of the one-day series away to Australia, and at home to the Netherlands, before one of New Zealand’s sporting greats shuts the door permanently on what has been a fine international career spanning 16 years.

So where does Taylor sit when it comes to the best ever players to have donned the whites in the test arena?

There’s no doubt that he deserves to be at the forefront in any such discussion over the pub leaner, and to me, he drops down from his usual number four spot to number five, with great mate Kane Williamson at three, and his long-time mentor, the late Martin Crowe at number four.

There are many highlights, including the 290 against Australia in Perth, the highest score by a touring player in Australia. A triple century was within reach, and the rumour mill was in full force that he was allegedly told to hurry along so that skipper Brendon McCullum could then declare.

Of course, the relationship between McCullum and Taylor had been stretched to breaking point since McCullum was implicated in Taylor being unceremoniously told he was to de dumped as captain mid-tour in Sri Lanka in 2012.

Taylor put that behind him, and his class and determination were evident as he scored a brilliant 142 and led the team to New Zealand’s first test victory in Sri Lanka in 14 years.

A personal favourite though was his 154 not out against England at Old Trafford, Manchester in 2008 – his second time in three figures – and an innings of pure class that underlined that there would be plenty more highlights to come. 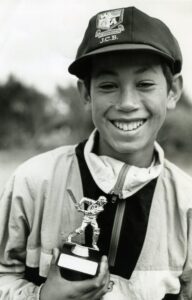 And the cheeky grin on the face of the former Lansdowne junior when he stroked the winning runs in the inaugural test championship final over India will sit in the mind for many years.

In the white ball format, his highest ODI score of 181no chasing down England’s score of 335-9 at the University Oval, Dunedin in 2018, when he batted virtually on one leg after aggravating a thigh injury, stands out.

A mighty pilgrimage of Wairarapa cricket fans to Seddon Park, Hamilton, on the first weekend in April looks on the cards for Rosco’s grand finale against the Netherlands and one last chance to see his distinctive ‘tongue-out’ celebration with hopefully one last century to give the fairy tale a truly happy ending.

All that leaves is the book, and won’t that be a hell of a read?

I reckon, though, the six-year-old boy who told then international batter Mark “Paddy” Greatbatch during a Central Districts game in Masterton that he would play for and captain New Zealand, never dreamt that 32 years later he would retire having donned the silver fern on more than 450 occasions, as one of our all-time greats.

Hats off to you Luteru Ross Poutoa Lote Taylor, you deserve all the plaudits that come your way.