Firefighters working to put out a grass fire on Te Whiti Rd in Homebush. PHOTOS/EMMA BROWN

Four grass fires on Wednesday highlighted the risk of tinder dry conditions in Masterton, wreaking havoc for firefighters throughout the day.

The chaos began just before 11am on Wednesday when Wairarapa fire crews were called to two grass fires within two minutes in rural Masterton.

The first call was to a fire along Matapihi Rd in Te Ore Ore, and the second along Te Whiti Rd in Homebush.

Masterton Fire Service station officer Garry Nielsen said both these fires burned about 500m2 of grass and were caused by machinery that created a spark on a stone or rock.

Crews from Masterton and Carterton responded to the fires.

The Carterton water tanker and two trucks attended to fire along Matapihi Rd and four crews were sent to the fire at Homebush.

Nielsen said both the fires were brought under control quickly, but these types of fires were common this time of year.

“Contractors need to be careful,” Nielsen said. “They can create a spark without even realising.” 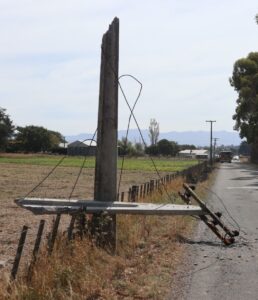 Meanwhile, just after 2pm, a loose mechanical arm on the back of a stock feed truck took out two power poles along Te Ore Ore Settlement Rd, Masterton.

A stock feed truck was travelling towards a poultry farm when an arm on the back of the truck swung out and knocked over two power poles.

The downed powerlines started two small fires along the road which Masterton firefighters put out.

An area of the road was cordoned off until the power was off, and the fires were extinguished.

Thirty properties were affected by the power cut at 2.24pm and Powerco was quickly on site.

It was estimated power would be restored by 9pm Wednesday night.

Crash data from the New Zealand Transport Agency shows that almost every two weeks, a driver takes out a Wairarapa power pole.

The latest happened on Saturday when a car hit a power pole in Carterton.

Nielsen said with the total fire ban now, “you can’t light fires, but you can still start them accidentally”.

He asked people to take care.

He said the water restrictions in place in Masterton did not really affect firefighting capabilities because putting out a fire was priority.

When responding to a rural fire, part of their planning is to locate alternative water supplies, such as a lake, creek, dam, or river that they could use to fill up with.