Switch off to drive safely In the second of a five-part series on Wairarapa’s road to zero fatal crashes, GIANINA SCHWANECKE examines the dangers of distracted driving and using mobile phones in the car. 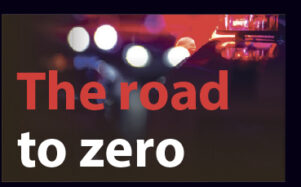 It’s an issue which has only arisen in the past decade but one that has quickly become a “pandemic” and is still on the rise.

Figures from police show there has been an 11 per cent increase in the number of Wairarapa drivers caught driving while also using mobile phones, up from 269 from July 2018 to June 2019 to 301 in the past year.

“It is a global phenomenon which is really just recently being recognised as an emerging high concern in terms of serious crashes.

“When you see the vehicle ahead weaving at erratic speeds you can ‘bet the house’ on the driver either being fatigued, impaired, or using their phone, especially during the day.”

In Wairarapa, one person is caught driving while using a mobile phone every 29 hours on average – and that’s only the ones who are caught by police.

Mobile phone use was especially bad during the covid-19 response, with a 78 per cent increase for the three months ended June 2020 compared with the same three-month period last year.

Pauling said this trend was indicative of busy modern lives and a desire to be ‘connected’ at all times at all costs.

He said it was “misguided” to think sending a quick text while driving was harmless.

“If you do this, how would you like to be at the wrong end of a head-on, with the other driver texting, just as you do on occasions, thinking it is safe, because you are an ‘experienced driver’.”

Ministry of Transport figures show 10 people died and 133 had serious injuries in crashes around the country last year where distraction from a mobile phone was a factor.

Getting caught is also costly in other ways.

It’s an issue easily remedied though, with Pauling advising to turn your phone off, use an app like ‘do not disturb’, or pull over to use your phone.