SWDC has now confirmed it bought a wide range of office furniture, costing almost $115,000, including GST. 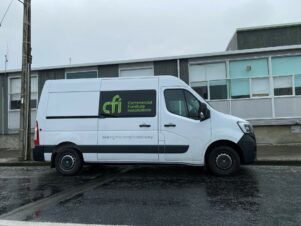 One of two large vans delivering furniture to SWDC in December. PHOTO/SUE TEODORO

The Times-Age asked SWDC for details of the deliveries on the day, but the request was dealt with under the Local Government Official Information and Meetings Act 1987 [LGOIMA] with a formal response sent last week.

The LGOIMA response said workstations and other items were bought.

The spend-up comes as SWDC has been widely criticised for its admitted miscommunication of last years rates hike of almost 30 per cent.

The SWDC spokesperson said it was necessary to buy the items now because existing equipment was a safety hazard, among other reasons.

“The current furniture was in a poor state and in many instances no longer fit for purpose or a safety hazard.”

They said the new things would allow for improved social distancing.

Old items had been repurposed or given away. Some had been sold to staff.

“Broken furniture beyond repair was disposed of. Existing furniture with a book value and able to be repurposed has been kept and/or stored for future use.

The remaining furniture was, in the first instance, offered and sold to staff for a small fee.

A Mua, the recycle/upcycle centre in Featherston, was offered the remaining furniture [mainly desks] for free. However, they declined due to lack of storage space and lack of demand for large desks.”

The Times-Age asked who authorised the expenditure.

“The expenditure was authorised and approved under the council’s Financial Delegation Policy,” the spokesperson said.

The LGOIMA response confirmed the 2018/2019 SWDC Annual Plan had included $500,000 of capital expenditure for renovation and refurbishment of the council offices, which
had funded the goods.

“This budget has not been fully utilised and has been carried over for the last two years. The new furniture purchases have been funded from this budget.”

The new office equipment was delivered by Commercial Furniture Installations, which uses the slogan ‘Making the complicated easy’. The firm is a specialist office provider whose website states it has serviced household brands like Vodafone, Amazon and Foodstuffs.