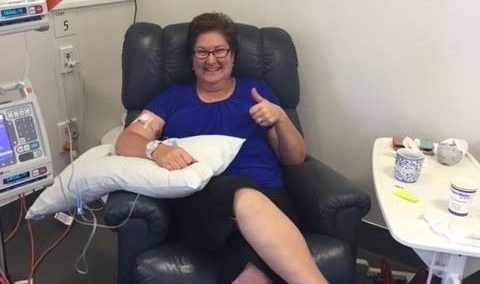 Tania, on her last day of chemotherapy in January, 2020. PHOTO/SUPPLIED

The ‘Survivor Champion’ of this year’s Relay for Life, Tania Andersen, tells the Times-Age about her journey with cancer. Health reporter SOUMYA BHAMIDIPATI writes.

“The surgeon came in and said what we’re looking at here is cancer … and it’s quite a large tumour.”

The then 47-year-old had been having stomach issues on and off and found it sore to sit down in 2018.

By early 2019, she thought she might have Crohn’s disease. In April, she was diagnosed with advanced bowel cancer.

“I was very in shock,” Andersen said.

“I knew that if I couldn’t get the surgery, then I wouldn’t last, I’d have a very short lifespan.”

An initial six weeks of radiation was ineffective.

In July 2019, Andersen began a course of chemotherapy which would last for six months.

The aim was to reduce the size of the cancer, to prepare it for surgical removal in March 2020.

“I got a Cancer Society call within a couple of days [of diagnosis],” Anderson said.

The society’s support provided counselling for her and her husband, and access to a library with books specialising in cancer.

When Andersen visited Wellington Hospital for radiation treatment [which was not available at Wairarapa Hospital and needed to happen multiple times a week], the society provided accommodation in Wellington, so she would not have to endure the extremely painful car journey over the Remutaka Hill more often than required.

Andersen came home for recovery after her surgery.

By the end of that week, the country was in lockdown, giving her ample opportunity for a much-needed rest.

A scan in June came back with negative results – Andersen was cancer-free.

“It’s just a huge, huge relief for my husband and me.”

Andersen was chosen as this year’s Relay for Life ‘Survivor Champion’.

She would lead about a hundred cancer survivors and their supporters on the first lap around the track, accompanied by the Masterton pipe band Fern and Thistle.

“The Survivor Champion represents all of the survivors, past and present, at the event,” she said.

“I was very honoured to be asked to do it.

“I did have a very difficult journey with cancer.”

She hoped sharing her story would encourage others who may be hesitant to talk about their cancer, for fear of burdening their loved ones.

It would also be her first time participating in the event.

“Just having that camaraderie with people who are there to support people having to go through it, having a common goal, that combined compassion.”

Relay for Life involved an 18-hour team relay around a circuit, and would take place at Clareville Showgrounds on March 20-21, beginning at 4pm.

“The walk itself represents the cancer journey,” Andersen said.

“It gets dark, you’re scared, you don’t know what’s going to happen … then in the morning it represents people coming to the other side, coming through it.”