Surf’s up for local farmers The quickly growing Surfing for Farmers initiative began in Wairarapa yesterday, allowing farmers to get off the farm and into the water.

The initiative was launched in Gisborne in 2018 as a learn-to-surf programme geared up to provide an opportunity for farmers to take up a new skill, get some fresh air, and interact with other locals, Surfing for Farmers said. 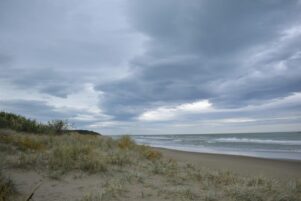 Riversdale Beach on a rainy day.

Surfing for Farmers Wairarapa organiser Amanda Bowie hoped they would be able to continue the initiative past February.

Bowie wanted to do something for her community and farm staff to help them get off the farm and have some time out.

For Bowie, looking out for people’s mental health and overall well-being was serious.

“A big part of living and working rurally is that you must make a real effort to talk to people and connect with people. You can do it over your phone, but sometimes you just need that face to face interaction,” Bowie said.

Surfing for Farmers founder Stephen Thompson saw a need to create a space for farmers to talk about something other than farming, and in combination with his love for surfing, thought up the initiative. 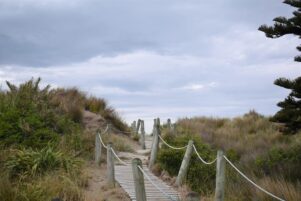 Mental health awareness is vital for all members of the Matariki Terraces farm, Bowie said.

Bowie grew up on the Kaikoura coast and dabbled in surfing but never really learnt to surf properly.

Bowie thought that surfing would be a cool skill to pick up, as well as a way to get some exercise off the farm.

“It doesn’t matter if you haven’t surfed before; this is just to get off the farm for a few hours and spend some time with your community,” Bowie said.

“We are incredibly privileged to be able to live and farm right on the ocean; our community is in paradise”.

Organisers have provided wetsuits, boards, and a coach but would like to encourage anyone who has their own wetsuit or board to bring it along.

The State of the Rural Nation Survey carried out by Bayer New Zealand, and Country TV in 2018 found “70 per cent of rural New Zealanders have felt increased stress over the last five years”.

Fifty-four per cent of people surveyed said financial pressures were the main reason for stress, while 49 per cent said environmental factors such as droughts and flooding was the leading cause of increased stress.

“To me, it’s not about depression; it’s about being proactive and helping people,” Bowie said.

“If someone is struggling in your family or your farm team, everyone feels it”.

Bowie said there had been a lot more talk about mental health in the past few years, but now was the time for action.

“If you see someone in your community or a member of staff having a hard time, it’s just saying ‘are you okay, I’m noticing change’.”

Bowie said the initiative and the mentality that needed to be adopted were about opening the door to have serious mental health conversations.

“It’s totally fine to feel down or depressed, but ultimately, you’re the only one that can control your own happiness,” Bowie said.

Bowie was positive about the future of farming.

“Farming is an awesome industry to be in; there are so many opportunities out there.

“Even the wider sector has a big impact on farms; it’s an exciting place to be and live,” Bowie said.

The Wairarapa initiative has been additionally funded by TFM Tractors and Cloud Yards.

Bowie was “keen to hear from others if they’d like to get behind us”.

Bowie said the best way to get in contact to donate or become a sponsor was through the Surfing for Farmers Facebook page.

If you’d like to get involved, the next session will be held on of December 10 at 6pm, meeting at Riversdale Beach Surf Lifesaving Club.

Participation is open to anyone in the community – not just farmers, Bowie said.