Support shown for our parents The expo, attended by about 200 people, included stalls from a range of groups and services which can support parents and families during pregnancy or after the birth of a child.

Abby Hollingsworth, director of operations for the Ruth Project, said the purpose of the expo was to showcase the groups which can provide wrap around care to parents throughout their mental health journey – such as assisting with physical health, childcare, hands-on support at home, and creative outlets.

Also coming on board were personal trainers Lift with Ella, Livwell and Optimus Fitness, Flow Yoga, and Back in Action – which offers specialised physiotherapy for mothers after giving birth. 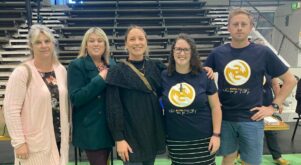 Abby Hollingsworth (second from right) and Luke Tiller of The Ruth Project Wairarapa with staff from Rethink Accounting – who came to support the expo.

Hollingsworth said she was delighted with the success of the event – and was particularly moved by the supportive response from the exhibiting organisations, many of whom were keen to “jump on board” for future events.

“We’re so grateful to have that support. It’s very clear we have a community that wants to do what it can to help parents and families – and we so touched to see that,” she said.

“It was a great event– there was a really relaxed, fun atmosphere.”

Adding to the atmosphere, Hollingsworth said, were several interactive sessions from the stallholders – for example, the fitness organisations ran some “mini training sessions”, and Karina Gough did a mums and bubs yoga demonstration, which people were free to join in.

The Divine River, a charitable organisation which runs workshops on making re-useable period products, were also on hand to offer some sewing demonstrations.

While parents checked out the stalls, younger family members flocked to the bouncy castle, provided by the recreation centre.

Hollingsworth said she was heartened to see parents taking time to sit down and engage with the stallholders.

“We could see their openness and willingness to reach out and have a conversation.”

Perinatal Mental Health Awareness Week, held from May 1 to 7 each year, is a campaign to raise awareness of perinatal mental distress and spread awareness of the support available to families.