Almost 70 children who have suffered cancer get to “just be kids” again for a week as they participate in a variety of activities at Camp Quality in Masterton. 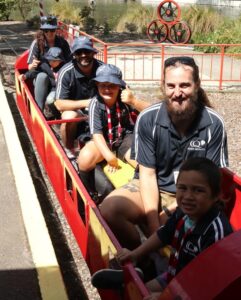 This year, the week-long summer camp for the lower North island area is being held in Masterton for the first time in 14 years.

Camp Quality regional manager Matt Perkins said the fundraising, donations, and a huge community effort gives them the ability to provide the camp at no cost to the child and their families.

The camp costs about $100,000 for food, accommodation, buses, training, and activities which are often free or subsidised.

Each child gets paired with a companion whom they meet before they go on the camp.

Perkins said it was important to build the relationship with the child and confidence with the family before the camp started as many wouldn’t have been away from home before.

While some may have developmental or physical effects as a result of the cancer, having the companions encourages them to be independent.

Every day, it is a surprise to the child and their companion what they will be doing.

Almost 100 volunteers, including companions for each of the 68 children in attendance, give up their time to make the camp possible.

While most of the children are fine, some maintenance treatment may be needed so they have five qualified nurses attached to the camp. Perkins said the camp gave children a break from what may have become their reality.

As the camp went on it was great to see the confidence of each child grow, he said.

One of his favourite nights at the camp was the themed dinner, which they would be having later in the week to go with this year’s Animal Planet camp theme.

He said many children put a lot of effort into their costumes which was “pretty cool”.

On day two of the camp yesterday, children were enjoying various activities around Queen Elizabeth Park, including mini golf, train rides, a mini merry go round, sports and paddle boats.

Twelve-year-old Jake from Masterton was enjoying his sixth camp with his companion William.

While tucking into an ice cream, he said his favourite thing about the camps was the food.

Discovering what they would be doing was always exciting but events like the final night disco and themed dinners were always a highlight for him. Twelve-year-old Alex from Masterton with her companion Caylee.

This year, he was planning to dress up as a zookeeper and his companion William would dress as a sloth.

William who was a companion for the fourth year, said he kept coming back because “it was enjoyable to see the kids grow up through the camps”.

Alex, 12, from Masterton who was on her sixth camp said she looked forward to the camp each year and hoped to keep coming back.

She said it was cool that the camp was in Masterton because she was able to show her friends where she was from.

She also agreed with Jake about the food.

More information can be found at campquality.org.nz