With the end of the summer sports season, Times-Age sportswriter CHRIS COGDALE reflects on some of the achievements and failures over the past six months, with some not-so-serious awards.

The World Here I Come Award Masterton boxer Zane Hopman moved a step closer to a top 15 world ranking after winning the Pro-Box New Zealand Light Heavyweight belt, in a unanimous points’ decision over Ratu Dawai in front of a packed house at Copthorne Resort Solway Park in October.

Bugger, for the first time in their 61-year history the Golden Shears were fleeced of their annual championship after the country went into Alert Level Two in late February.

The Wairarapa men’s bowls team found the right bias at the national intercentre championships in Wellington. For the first time in their history, the tiny Wairarapa centre qualified for the quarterfinals, where they beat Manawatu to make the semifinals against Auckland. A place in the final came down to the last bowl in the fours with the Jafas holding on in a nailbiter. 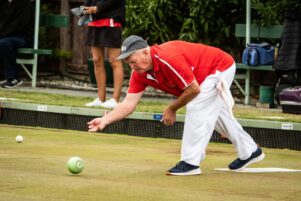 Peter Ireland played in the four for the
giant-killing Wairarapa bowls team.

St Matt’s backed up their achievement, qualifying for this year’s finals for the third straight year, with victory in the Central Districts playoffs.

Wins over Manawatu in cricket are as rare as hen’s teeth, but the Highmark Homes Wairarapa, brilliantly led by two half centuries to Central Stag Seth Rance, recorded their first win over their nearest neighbours since 1984.

Leave it to Late Award Corbin Strong left it to the final sprint on the streets of Wellington to win the NZ Cycle Classic by eight seconds from NZ National Team teammate Finn Fisher-Black, who had led going into the final stage, after four gruelling stages in Wairarapa.

Opening batsman Jake Jonas was felled by a bouncer third ball of Wairarapa’s second innings, with the team facing a potential innings defeat to Hawke’s Bay.

The 17-year-old was unperturbed though and batted through the innings of 74 overs, finishing on 70 not out, and saving the game for Wairarapa.

For the second time in three seasons Giants Blue have had a seemingly legitimate protest thrown out by Hutt Valley Softball. Their Major B Women’s semifinal should have stopped after 90 minutes and the scores revert to the previous completed inning, when Giants were leading. Instead, Totara Park Gold won and went through to the final. Oh well, I suppose the Blues live on the wrong side of the Remutaka Hill.

Medium-fast bowler Seth Rance spent much of the Central Stags’ season on the physio’s table with a calf injury suffered in a one-day clash with Canterbury. He subsequently missed the Super Smash T20 and the remainder of the Ford Trophy, only to return for the last rounds of the four-day Plunket Shield and aggravate the injury again.

Wairarapa medium-fast bowler Stefan Hook was a menace to opposition batsmen, claiming 25 wickets at an average of 13.48 throughout the Furlong Cup two-day cricket competition. His haul lifted him to 125 wickets in Hawke Cup cricket, just 16 away from the record of 141 held by Tony Short and Dave Biss. Hook has now taken 154 wickets for Wairarapa in all three formats.

Martinborough confirmed their ranking as the region’s strongest tennis club, claiming their third straight Gawith Shield for the best in regional one interclub championship. The southerners dropped only one fixture, to Masterton, who they went on to dominate 7-2 in the final.

The disappointment was that only three teams fronted for the championship.

But three games and a final does not quite feel right for one of Wairarapa sports oldest trophies, which was first played for in 1919-20. 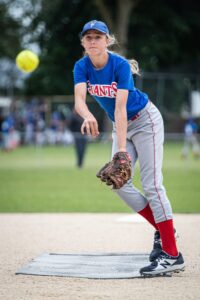 Maggie Shields is one of Wairarapa’s rising stars.

Jake Jonas – four centuries since New Year says it all about this gutsy talented cricketer.

Emma McLeod – the allrounder starred for the Southey Sayer Wairarapa Korus and St Matthew’s, and has a massive future.

Maggie Shields – starred for the Giants age group teams and was MVP for Hutt Valley at the under-13 national championship.

Olivia Mancer – this promising bowler won the Manawatu Open Pairs with her mother Fiona and won Wairarapa Champion of Champion Triples and Fours with her Featherston club.

Liam Lamb – qualified for the World University Games in the 5000m and is less than a second off the standard for the 1500m, which would boost his chances of getting to Chengdu in August.

Gavin Hamlyn – a bit older than the other rising stars but this former top golfer only joined the Carrington Bowling Club four months ago. He went on to be an integral member of the giant killing Wairarapa team at the national intercentre championships.