The rewards from a hunt. PHOTOS/SUPPLIED

A new course taking students from classrooms to hunting fields was launched at Makoura College this year, Jade Davies reports.

Peter Harrison of Maori health provider Whaiora, driven by love for a popular Kiwi pastime and a goal to get kids moving, had pitched a new programme to Makoura College. Harrison, employed as the rangatahi physical activity promoter, came up with a new approach to outdoor education last year.

Mahinga Kai [working for your food] covered a range of topics relevant to hunting.

“My real goal is promoting physical activity,” he said.

“Kids these days spend a lot of time on things like social media, but when you give them something that sounds interesting, like hunting, they’ll walk up that hill and won’t think twice about it.

“Their mind is focused on something other than the fact that their legs are burning.”

The pilot version of the programme aimed to teach students over 16 years of age basic first aid skills, including navigating emergencies, hunting ethics, navigation, game species anatomy, firearm use in a hunting context, hunting techniques, and what to do with meat to minimise waste.

The first session uncovered what the students wanted from the class. Some said they thought it sounded interesting, others said they wanted to get food for their whanau “to help support mum and dad”.

Makoura College principal Marion Harvey said she was excited about the course, which involved “authentic learning” and “life lessons”.

“It’s a win-win for our students and the community.” Initially, 45 students signed up, so Harrison and Makoura outdoor education instructor Vicky Pilling delivered the project to two cohorts, the first during terms one and two and the second during terms three and four, to ensure the classes covered both warm and cold seasons.

Harrison hoped to add the opportunity for participants to gain up to 45 NCEA unit standards to contribute to their academic performance.

One of the challenges he faced was funding, which was “difficult when it comes to hunting and firearms and the perceived risk involved”.

With support from community members George Tatham, King and Henry’s William Roseingrave and Eketahuna Country Meats’ William Riddell, Harrison was able to access farmland and expertise to support the course.

“Without their assistance, the project wouldn’t have the same depth of knowledge their experience brings to the table,” he said.

Before heading out on hunting expeditions on farmland, the students practised using firearms at the Gladstone Gun Club free of charge under the supervision of range master Rhys Richards.

They practised until Harrison was “comfortable they would be able to dispatch an animal humanely”.

In the classroom, the students also learned about firearms laws. Only one rifle was taken on the hunts, held by Harrison until the students were in a suitable position. When a target was in sight, Harrison coached the student, reiterating previous lessons to close the bolt, range the target, make aim adjustments, and remove the safety. 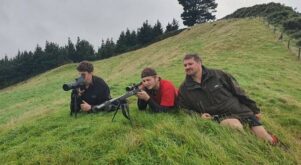 “It’s [the outings] something that is quite easily managed with proper planning and forethought,” he said.

“The riskiest part we have had was driving out to Homewood and coming across large trucks on the narrow roads.”

Harrison said he had not had any negative responses, aside from the odd complaint that the classroom smelled worse than usual during one of his sessions.

Harrison said there are never more students than adults on the hunts, and at times there had been three adults and one student with family members wanting to join in on the excitement.

After the group studied an animal’s anatomy and butchery techniques, the meat was packaged and divided up among the students on the hunting trips, meeting Ministry of Primary Industries regulations.

To accommodate the demand for the course, a new cohort of students would undertake it in terms three and four.