Wairarapa College’s determined defence of their goal line paid dividends as they went on to beat Wellington College in a shootout in the final of the Wellington secondary schools boys’ Premier competition.

Waicol goalkeeper William Brown had to bring all his skills into play when the final went to a shootout after neither side could score in extra-time.

Brown continued his good form in shootouts and has an 80 per cent save record, having conceded only two goals in the two shootouts in the semifinal and then the final.

Both teams missed their first two attempts before Wellington broke the deadlock on their third attempt.

Perry Lewis got Waicol on the board before Wellington missed their fifth attempt, and Craig Pankhurst stepped up to slot home the winning goal.

Until that point, Waicol’s defence helped them stay in the game. 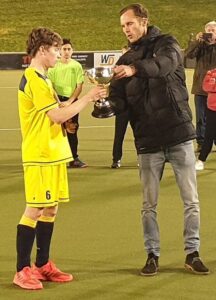 In a tense final on Friday night, chances were at a premium, and the scores were locked 0-0 at fulltime.

The game went into extra-time and both teams had to drop two players to the sideline and restart with nine players each.

If that wasn’t a big enough hurdle, Waicol were reduced to eight players towards the end of the first period of extra-time, with a player sent to the sin bin.

The second period of extra-time had the teams drop another two players, meaning Waicol had to play with six players for all but one minute of the period.

A massive defensive effort had extra-time finish scoreless which sent the game into the shootout.

Rathkeale finished third in the boys’ premier division with a 2-1 win over Paraparaumu College.

In the premier girls’ final, St Matthew’s were no match for Wellington Girls’ College going down 0-5.

Wellington Girls were in control from the start and scored an early goal. Although St Matthew’s pushed hard, they could not penetrate the stubborn Wellington Girls’ defence.

Waicol were third in the girls’ premier division after a 4-0 win over Tawa College.