Documents stamped under intimidation claim to give police powers to self-appointed ‘sheriffs’.

The Wairarapa Times-Age understands that Justices of the Peace [JPs] across the Wellington region were intimidated, possibly by gang members, and were forced to sign documents.

Eketahuna based JP Corinna Carew stamped a document that claimed to give the holder, Kerre Ann Brogden, the power to arrest and serve documents.

None of the documents had any legal standing.

Brogden sent warrants to Director General of Health Dr Ashley Bloomfield, epidemiologist Michael Baker and Dame Patsy Reddy, the former Governor-General of New Zealand, threatening them with arrest if they did not leave New Zealand by 2pm on March 28.

The warrants had been emailed to the recipients only three hours earlier.


Brogden had also shared the sheriff documents in an online group, encouraging others to fill them out.

The Royal Federation of NZ Justice’s Associations [RNZJA] confirmed that they were investigating the documents.

“There are people who are being somewhat overbearing,” National Manager of NZ Justices Tony Pugh said.

“There was a person who was rather forceful in manner.”

Pugh said he did not believe JPs were unsafe. 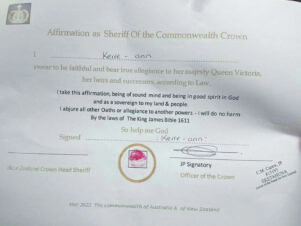 The document with Carew’s signature and stamp. PHOTO/SUPPLIED

“JPs regularly get information about keeping safe and covid has already created a heightened sense of security.”

However, he said that the safety information was not a rule and the organisation could only
recommend and suggest.

Further documents had appeared in Paraparaumu and Upper Hutt.

The documents included affirmations as sheriffs and arrest warrants.

“We do not know if this is localized or if the pace is going to pick up around the country,” Pugh said.

The investigation had been expanded nationwide and JPs had been told to be careful of what they were signing.

It was the decision of individual JPs to refer intimidation matters to police.

Carew could not be reached to confirm if a report had been made.

It was unclear what those creating these documents could be charged with, although the Times-Age understands perjury could be an option.

Protesters could not be charged with fraud because the documents were not pretending to be anything else.