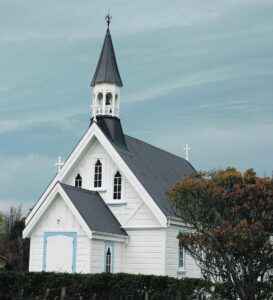 A rural church with a history of more than 100 years burned to the ground on Monday night.

St Andrew’s Anglican Church at Whareama, 30 minutes east of Masterton, was already engulfed in flames when fire crews arrived at the scene at about 11.30pm. There were no reported injuries.

Fire crews from Masterton, Carterton, Riversdale Beach, Castlepoint, and Tinui attended but could not save the church.

A Fire and Emergency spokesperson said fire services received a call at 10.58pm. He said a specialist fire investigator was yet to determine the fire’s cause.

Masterton Fire Station officer Mike Cornford said that when his crew reached Kerosene Ridge, near the turnoff to Whareama, they could see that the church was already consumed by fire.

“We made a prediction at that point that there was probably not going to be a lot of building to save by the time we got there, which was the case.” 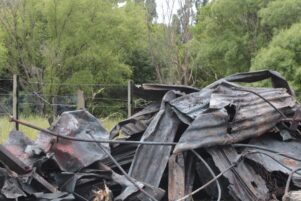 Crews spent about three hours at the scene, ensuring that all hotspots had been extinguished.

“It was on the ground by the time we got there,” Cornford said.

“It’s certainly a sad loss for the people of Riversdale, Tinui, and Whareama area.”

Witness Sherree French was in her house on a hill overlooking the church.

“It was horrific to see it in person,” she said.

“My husband saw the fire reflecting in the window. He thought it was his own shed.” 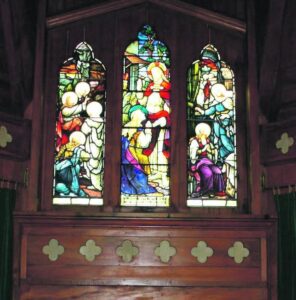 After her husband called emergency services, French went down to the church at about 11.15pm.

At this point, the walls of the church and its bell tower were still standing.

“The whole framework of the church, you could see it engulfed, like a skeleton, before it started to collapse.”

The bell tower came down while French was still at the scene.

However, she said that on Tuesday morning, there was no trace of the bell among the debris.

“There’s absolutely nothing left … The heat was incredible.”

Although she did not ordinarily attend church services, French said she had attended the Christmas carol service at St Andrew’s.

“That was always really popular; it was generally full,” she said. 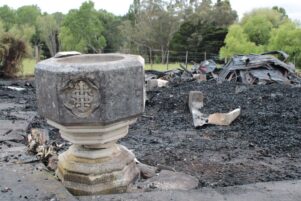 The baptism font stands among the church’s ruins. PHOTO/TOM TAYLOR

The Rev Steve Thomson, the priest in charge of St Andrew’s, received a call at about 6.15am on Tuesday.

Thomson visited the site with police in the morning to point out where the various parts of the church used to be.

“There’s nothing in the church you can recognise – nothing. It was totally wiped out, with just piles of ash left.”

Thomson said brass family plaques lining the walls had also been lost in the blaze. He said the church had not had frequent services since covid-19 due to church protocols around the pandemic.

However, it had been an icon in the district for residents and passers-by alike. 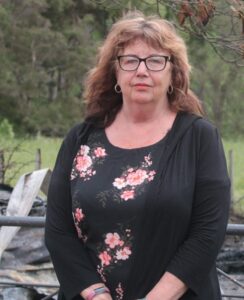 “So many people whenever I’m down in Wellington say to me, ‘Is that beautiful little church on the way to Riversdale in your parish?’

The church had been built after services held in the Whareama schoolroom had run out of room.

The Rev JC Andrew laid the foundation stone for the church in 1903. In recent years, the church had undergone extensive repair and restoration work.

Tinui Times editor and former church organist and Caryl Forrest said at least four generations of families had been baptised and married at the church.

Masterton resident Lyn McDonald visited the site on Tuesday, paying homage to the church her great-great-grandfather, William Birkett had a hand in building.

“My ancestors lived at Whareama, and my great-grandmother and her husband were the first people to get married in the church,” McDonald said.

Thomson said the parish would organise a farewell service for the church.