More than half of all police pursuits in Wairarapa over the past year were abandoned due to dangerous driving, but 16 per cent still ended in crashes, latest police data shows.

The data found that police gave chase to 55 drivers in Wairarapa from April last year to March this year but chose to abandon 33 [60 per cent] of these due to dangerous driving.

Nine of these fleeing drivers ended up crashing their vehicle after trying to evade the red and blue flashing lights in their rearview mirror.

Wairarapa Road Safety Council executive member Rebecca Vergunst said she was also concerned by the number of Wairarapa drivers caught speeding or not wearing their seat belts in the past year.

“It’s disappointing to see the large amounts of people not wearing seat belts or speeding, and it doesn’t seem to be decreasing. 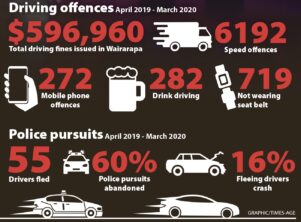 “Research has shown time and again that if you crash, your outcomes are much better if your speed is reduced and you are wearing a seatbelt.”

The data found that the majority of driving offences over the same period were speed-related with 6192 speeding offences recorded.

The most common way people were caught out was through mobile speed cameras.

It’s a costly offence with speeding fines racking up more than $472,000 in Wairarapa.

Seatbelt offences also dominated the statistics with 719 offence notices issued accounting for more than $96,000 in fines.

Driving while under the influence was another issue, with 282 people pinged for drink driving and seven people for drugged driving.

Vergunst said drivers needed to take responsibility for their safety and the safety of those they share the road with.

“If you can’t drive safely, you should not be driving.

“The risk of hurting other road users, including walkers and cyclists, is too great.”