Speed reduction is on the cards The intersection of Norfolk Rd/Cornwall Rd with State Highway 2 is a crash hotspot. PHOTO/FILE

Carterton has the lowest road death rate in New Zealand, with three road deaths for every billion kilometres travelled on its roads.

But according to district councillor Rebecca Vergunst, even one serious injury on Wairarapa roads is one too many.

Vergunst is a representative on the Wairarapa Road Safety Council.

She said drivers needed to take responsibility for driving safely – “this means keeping to the speed limit, or less depending on the conditions; always wear your seatbelt and make sure your kids’ car seats are strapped in properly; be aware of distractions; don’t drive with drugs or alcohol in your system”.

The Infometrics Regional Well-being Report found Carterton’s road death rate was the lowest in the country with 3.01 road deaths per billion kilometres travelled in the district.

This was followed by second-ranked South Wairarapa (5.26), and third-ranked Lower Hutt City (5.34).

Wellington City had the seventh-lowest rate in New Zealand, followed by Masterton in eighth place.

Regardless of the favourable statistic for Carterton, its council is not resting on its laurels.

Instead, it’s taking all measures to make the rate even lower – starting with addressing the crash hotspot at the Norfolk Rd/Cornwall Rd intersection with State Highway 2.

Carterton Mayor John Booth and deputy mayor Russell Keys made an “impassioned plea” for a reduced speed limit along the stretch of SH2 at a meeting with the New Zealand Transport Agency last Friday.

Booth asked NZTA to reduce the speed limit along the more dangerous sections until a more permanent solution could be enacted.

“As a short-term measure while they get their plan done, I’ve pushed to bring in speed restrictions from south of Norman Ave through to the Waingawa Bridge. I don’t know what speed it would be though,” he told the Wairarapa Times-Age.

“The only way we can [make it safer] is to reduce the speed to give people more time.

“If there was an accident it would lessen the damage.”

NZTA seemed to listen, Booth said, saying it had been a “positive” hearing despite limited funding.

He said NZTA hoped to come to the community with their plan in September and would want to consult on this before finalising it.

“They are going to do their best to minimise the risk by looking at putting a speed restriction in place in the meantime.”

According to Wairarapa Road Safety Council manager Bruce Pauling, any reduction in speed could be the difference between a fatal and non-fatal crash at the intersection. 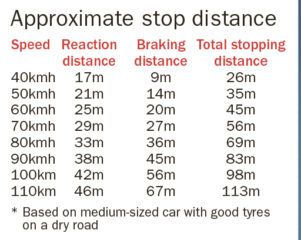 “An average ‘reaction time’ for a driver to recognise a hazard ahead and start to brake is around 1.5 to 2 seconds,” he said.

On a dry road, a car travelling at a speed of 100kmh would have a total stopping distance of 98m.

In comparison, a car travelling at a speed of 70kmh would have a total stopping distance of 56m.

On a wet road, the stopping distances would increase to 122m and 69m respectively.

Pauling said while Carterton’s road death statistics were “heartening to a degree”, the aim was to have zero road deaths in Wairarapa.

“Any death or serious injury is a tragedy for whanau and our communities as we are a very tight-knit bunch, and the ripple effect from these crashes spread far and wide across the district.

“Wairarapa has already had three fatalities from crashes this year, with one person killed in each of our three council areas.

“It takes a few terrible crashes and the data suddenly doesn’t seem that flash.”

He said winter brought adverse road and weather conditions, “so all of us need to be alert and stay safe on our roads”.

“Recently we have had several bad crashes where the occupants have been extremely lucky to go home to their loved ones.

“Nobody plans to crash, but they happen in an instant, and whether it ends with panel damage or a death, can sometimes be a lottery.”

Choose tyres that are right for your vehicle and the driving you do. 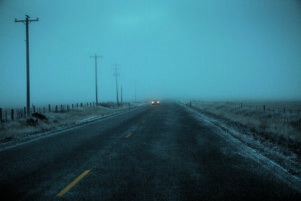 It is best to replace your tyres in sets of four, or at least in pairs on the same axle, to maintain consistent handling.

Regularly check your tyres to make sure there is plenty of tread.

The minimum legal depth is 1.5mm but the more tread you have the better the grip and the safer you’ll be.

In winter, your tyres will have less pressure than in summer, and lower pressures in your tyres increases fuel consumption, and wear on the tyres.

Check your tyres at least twice a month with your tyre pressure gauge or at the garage when you fill up.

Never leave home with a semi-iced-up or smeared windscreen.

Hose down iced-up front and rear windscreens and mirrors or use a suitable ice scraper.

Never use boiling water as this can crack your windscreen.

Remember to change your wiper blades at least once a year, and inspect them frequently for wear and tear, especially in winter.

Apart from the usual rules to be followed such as seatbelts, sticking to a safe speed, not being distracted and no alcohol or drugs when driving, the wetter, colder, icier, or gloomier the conditions are, the more you will need to slow down to read the road.

This will give more time to see and comply with the road signs, safely negotiate bends, make necessary driving adjustments, and not suddenly brake on a wet road leading to a loss of control of your vehicle.

Drive at a safe travelling distance because it takes longer to stop on slippery roads.

When travelling in fog, rain or snow, drive with your lights dipped for increased safety.