Solar panels on the roofs of Douglas Park School buildings save the school thousands of dollars a year. PHOTO/SUPPLIED

Principal Gareth Sinton said the school was on track to achieve its goal, having installed 50 extra solar panels on classroom roofs last year, bringing the number of panels to 62.

A further 50 solar panels were planned for the roof of the school hall halfway through this year.

“Already from 9am to 3pm – which is peak demand while the kids are here – even on a [cloudy] day like this, we’re pretty much running on our own power,” Sinton said.

“That’s with a heat pump or an air-conditioner in every single classroom.”

Douglas Park had even started to give power back to the grid: about 100 kilowatts a day during weekends, when no pupils were at school.

With the additional solar panels this year, Sinton said that the school could become a mini power provider to the community.

Their immediate neighbours could potentially access a cheaper rate for power through Meridian or Genesis, thanks to the school’s efforts.

Sinton said lighting had been a massive cost for the school’s 16 classrooms and four other spaces.

Savings of about $12,000 on the power bill last year would free up more money for learning, Sinton said.

A group of pupils called the ‘Solar Sleuths’ had access to the school’s Genesis account and could track how much money was spent on power each day, as well as the kilowatt usage every 15 minutes.

The Solar Sleuths met once a week and delivered messages to teachers about the trends of power usage in their classrooms at different points during the day. 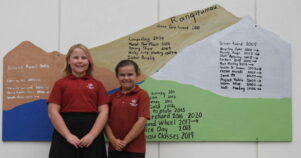 Pupils managed everything from the worm farm, composting, and recycling, to the nurturing of fruit trees in the school gardens. This year they were looking at the possibility of obtaining some beehives for an area behind the school pool.

Members of the Enviro Team said they had planted vegetables in planter boxes alongside the classrooms.

“The thing that I really like to do is pull out the weeds,” Willow, 8, said. “We’ve got these cool tools that we use.”

“We planted some new fruit trees last year and did some new seeds in the garden,” Maddi, 9, said.

She had written down a list of things the school needed, which the school would apply for through the Countdown Growing for Good grant.

Maddi also had the idea that the school could collect rainwater from the roof to water its vegetables.