Solar bins to save money Solar-powered waste bins will compact rubbish and save money throughout the Tararua District.

Tararua District Council had bought four bins so far and intended to place them in relatively remote areas for a steady stream of visitors. 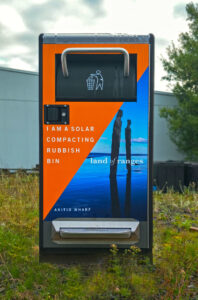 Solar panels on top of the ‘BigBelly’ bins would power them to send real-time data to council contractors. The data would indicate how full each bin was and when they would need emptying.

“A contractor won’t need to go out and check if the bin needs emptying,” Rule said.

“And they’ll need to be emptied less frequently because the rubbish is compacted.”

The bins could hold up to 600 litres of waste – up to 10 times the amount of a standard litter bin. A sensor within the bins would activate a compactor which would crush the rubbish down when it reached a certain level.

The bins cost $9220 each, but mayor Tracey Collis said they would save money in the long run.

“They save on bin-emptying costs, reduce litter, and are better for the environment,” she said.

“There is really no downside to them. We are grateful for the support from central government in managing our waste.”

The four bins were co-funded through the government’s Tourism Infrastructure Fund. The fund provided up to $25 million annually to develop tourism-related infrastructure to support regions facing pressure from tourism growth.