Smash and grab stops the music 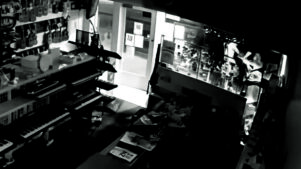 CCTV footage of the burglary.

Thieves targeted a Masterton music store on Thursday night, smashing the display window and taking off with valuable instruments.

Selah Music Works owner Stephen Shivas said the burglary and damage were devastating, especially in the wake of a lockdown in which he had lost a lot of income.

“I’m pissed off,” Shivas said. “We’re losing money as it is, and then that comes along and sets you behind another couple of weeks. It just makes you wonder if it’s worth being in business.”

After a failed first attempt to break the strong display glass, the thieves returned with tools to complete the job. CCTV footage showed the thieves arriving outside the store at about 3.40am and then again at about 4am.

Shivas said the thieves appeared to be two young males who were riding on a dirt bike.

“The first time they threw a rock or something similar, then they shot off and came back about 20 minutes later with something like an axe or a machete and made a decent enough opening to take off with about $2500 worth of guitars.”

The guitars, an Ibanez Artist and a Crafter Slim Arch, were distinctively coloured in sunburst style. Shivas said the guitars were likely scratched as the thieves pulled them out of the window.

It was not the first time the store had been targeted.

About a year ago, vandals had smashed the windows of Selah and another store along Queen St.

Selah was closed on Friday while Shivas and a co-worker cleaned up the fragments of glass that had scattered halfway down the shop. 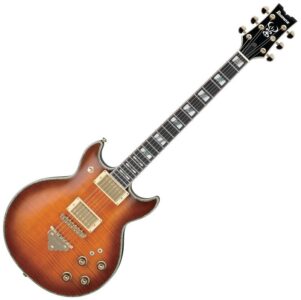 The stolen guitars: an Ibanez Artist [top] and a Crafter Slim Arch [below]. PHOTOS/SUPPLIED

“We’re losing a day’s trading and possibly more products that have been damaged by flying glass.”

Shivas estimated he would lose $1000 revenue from the loss of trade on Friday, plus an [insurance excess] for the window.

“The reality is, it’s probably going to set us back $5000. That might not seem like a huge amount, but to a small business like ours, it’s just about enough to put you over the edge.”

A witness heard a first smashing sound followed by a bike going down the street.

Shortly after 4am, she heard the sound of smashing glass.

“I looked out and saw two guys who had grabbed stuff from the shop get on their bike and go down the street.”

The witness said the thieves were dressed in black and carried guitars under their arms as they rode off.

“They gave it a couple of goes, so they’re determined. The glass was laminated, and they couldn’t get through it the first time, so they’ve come back with tools to smash through it.”

A violin, clarinet, guitar amp, and other instruments in the front window were covered in glass.

“The loss is more than just what they took. It’s a lot for him [Shivas].”

The witness said police were very quick to arrive at the scene.

A police spokesperson said police received a report of the burglary shortly after 4am on Friday.