A swarm of aphids on a tree branch at a Longbush property in 2016. PHOTO/FILE

In the summer of 2016 a plague of swarming black covered willow trees across the Wairarapa, coating everything in a sweet sticky form of honey dew.

From a distance it might have been mistaken for soot or mould, but the swarm was in fact a species of giant willow aphids [tuberolachnus salignus], whose population had exploded in the favourable conditions of a hot, dry summer.

The aphids caused a range of environmental issues, including damaging willows, polluting waterways, and impacting bees production of honey.

Six years on the aphids are still a problem across much of the country, though numbers haven’t quite reached the same plague-like conditions again.

The New Zealand Crown Research Institute Scion hopes to control and eradicate this pest aphid species through the introduction of a small parasitic wasp [pauesia nigrovaria].

They’ve applied to the Environmental Protection Authority [EPA] to release the wasp species, which targets giant willow aphids to lay their eggs — as the eggs hatch the aphid is eaten from the inside.

It’s hoped the introduction of the wasp will reduce and potentially eradicate giant willow aphids while posing no threat to native aphid species or other insects.

It’s a solution which has some in the Wairarapa beekeeping and farming industries feeling optimistic. 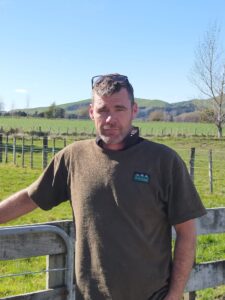 He said an infestation of giant willow aphids secreting honeydew into a stream had contributed to the death of more than 40 eels on his farm.

“We’ve had the willow aphids every year since but nothing like that year,” he said.

He said there was usually a spike in the aphid population around January and February, due to a combination of hot dry summer conditions and the sheer number of willow trees across the region.

Low water flows during the summer season meant the honeydew produced by the aphids was more potent and he believed this had contributed to the eel deaths.

“[The water] becomes anaerobic. All the oxygen goes out.”

He said the honeydew had also impacted the palatability of grass for stock, who wouldn’t graze in areas where the honeydew was prevalent.

“I don’t hold the aphids solely accountable, but they were definitely a contribution to the degradation of water quality in the stream.

“The problem is the willows. They are everywhere.

“Willows and aphids go together hand in hand.”

Since 2016, he’s removed all of the willow trees from the stream which runs across his property and formed a water catchment group to help protect the water quality.

“There’s great work being down to fix water quality.

“Down where we are, I’ve got rid of all the willows.”

He said he was also hopeful that the wasp would help reduce the aphid population. The parasitic wasp [pauesia nigrovaria], lays its eggs in the aphids. When the eggs hatch, they eat the aphid from the inside out. PHOTO/SUPPLIED

“I’d love to see the wasp as something in the armoury that helps.

“I would say here in New Zealand they will have their work cut out for them. If they dealt with 20 per cent of the population, it would be massive.”

“Our industry is spraying, and we know how beneficial some insects are,” he said

“The big concern would be seeing that they might affect other existing insects.”

One of the insect species worst affected by the plague of giant willow aphids is the humble honeybee.

Though he hadn’t personally had any issues with giant willow aphids he was aware of the trouble they caused.

“When the bees collect the honeydew and take it back to the hives, it goes like concrete.

“They can’t process it and eat it over the winter, so they starve.”

He said the “white, sugar-like” substance was difficult for beekeepers to remove from the hives.

It also results in the crystallisation of the honey which is unmarketable and difficult to extract.

Worse, the honeydew often attracted large pest wasps, like the German wasp and the common wasp.

“When they’re secreting their honeydew, they attract a lot of wasps because the honeydews so sweet.

“Wasps are one of our major enemies because they’ll take over a hive,” he said.

Clarke was also concerned about the mould formed on aphid afflicted willow trees, which could be beneficial to prevent river erosion in some areas.

He said he’d heard of parasitic wasps being introduced to help to target other pest species and was hopeful.

“I think it’s a good thing that they’re going to do it and I hope it works.”

The parasitoid wasp is a natural enemy of the giant willow aphid and provides New Zealand with an opportunity to use an environmentally friendly tool instead of using broad-spectrum insecticides to control giant willow aphid populations.

The EPA are considering the application but have also asked for submitters to have their say.

The submissions process will close at 5pm on September 17 with a decision about the application to be made in December.