Six of best save Wai-United Seule Soromon [on ground] bundles ball into the net for the first goal. Josh Rudland [No 9] watches on. PHOTOS/JADE CVETKOV

Wairarapa United saved their best for last with an emphatic 6-0 win over Waterside-Karori [Wharfies] to retain their place in the Central League.

United went into the last game of the season at Trust House Memorial Park on Saturday needing a win to be certain of avoiding relegation.

As it was, the victory was vital with bottom-of-the-table Stop Out upsetting Napier City Rovers 3-2 away.

United finished the season in eighth place on goal difference from Petone, with Stop Out relegated to the Capital Premier League.

United got off to a nervy start with Wharfies looking the more composed in the opening stanzas.

“The nerves and the stress on the boys was unbelievable,” United coach Davor Tavich said. 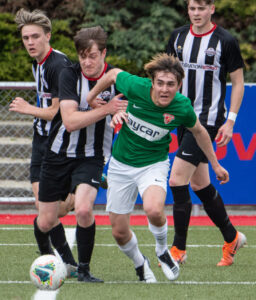 “You could see the first 15 minutes we played with a sort of cramp in our legs, but then we loosened up and relaxed and then we started playing beautiful football.”

After the slow start, it was veteran striker Seule Soromon who sparked the game into life when he thought he had scored after challenging Wharfies goalkeeper Logan Kinajil-Moran, only for the referee to deem the challenge to be a foul.

From then on, the former Vanuatu international was back to his best as he hassled and hurried the Wharfies defence.

Soromon finally got his reward in the 42nd minute when he bundled in a scrappy goal.

He then doubled the lead two minutes later running on to a through ball and beating Kinajil-Moran with a regulation finish.

Soromon had a great chance to complete his hat-trick when he had one on one with Kinajil-Moran, who did enough to deny him.

He then hit a screamer from 35m forcing Kinajil-Moran to tip the ball over, before he was subbed to rapturous applause from the good sized crowd.

“When you bear in mind that he doesn’t train at all, he just comes and plays and gives everything he has, and I am so thankful to him for coming into the team when we needed it most.”

United were far from safe against a dangerous counterattacking side and needed a third to put the game out of reach. That came in the 68th minute when midfielder Jonty Roubos found space in the box and chipped the goalie.

The former Wellington Phoenix star ran on to a beautiful back flip pass from classy midfielder Hugo Delhommelle, beat two players inside the box, and finished with a curling shot with the outside of the boot. Josh Rudland beats a Wharfies defender to the ball. Hugo Delhommelle is in support.

Rathkeale striker Josh Rudland wrapped up the scoring with two late goals and was thrilled with what he said was their best performance in the two years he has been with the team.

“It’s a massive result for us to stay up in the league, and obviously with Stop Out winning in Napier as well, if we had lost today, we would have gone down,” he said.

“We knew we had to go in and get a result to ensure we stayed up, so it was a little bit of nerves but apart from that, we played well. It capped off a tough season.”

Wharfies did have a chance to get on the scoresheet when awarded a penalty for a clumsy challenge, only for Scott Morris to pull off a brilliant save, capping off an outstanding season for the talented goalkeeper.

Tavich was over the moon and said to win 6-0 in the strong Central League is outstanding.

“The boys just played so hard and we created a lot of chances, and we scored beautiful goals. We did leave it a little bit late but better late than never.”

Tavich said he never lost faith in the team despite the battles throughout the season.

“I know this group of young men are outstanding.”

“The games that we lost even when we got smashed, they stuck together, they trained hard, they tried hard, and then at the end I knew it would come good and eventually it did.

“I’m so proud of the efforts from the young fellas and the seniors.”