At 11amon Wednesday, the Dish Cafe cabinet was full of homemade baking, the coffee machine was steaming, and conversations hummed for the last time under the watch of its owners, the Hannam sisters.

Having developed and owned the Lansdowne cafe for 12 years, the three sisters are hanging up their aprons, and each said they would have “a go at retirement” for a short time after taking a short holiday.

But volunteer work is on the horizon too.

Margaret McIntosh, 73, Pam Dick, 67, and Vicky Pope, 65 are famous in Lansdowne for their bustling cafe with homemade pies, sausage rolls, overflowing sandwiches, slices, and most recently their Christmas mince pies and rich Christmas cake on offer.

The women have sold their business to Manny and Shanika De Silva who were set to take over at 5pm on Wednesday night. 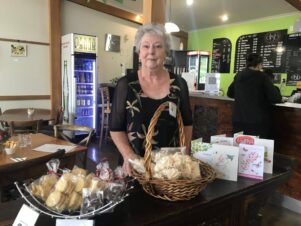 Dish Cafe baker Margaret McIntosh with some of the farewell cards and her latest baking. PHOTO/KAREN COLTMAN

Margaret is the primary baker and her sister Pam also cooks, Vicky maintains the books and oversees the nuts and bolts of the business, including the front of house operation.

The two older sisters have run cafe’s together for more than 35 years.

Their first cafe was Poppy’s on Queen St.

They were running Basil’s next door at the Lansdowne shops before owning Dish Cafe.

Margaret was known for her excellent cooking for the Masterton Golf Club in Lansdowne.

The Hannam sisters are close [one sister lives in Hobart] and were raised by a mother who was a “homemaker”. Homemade baking had been part of their lives “forever”, as had supporting people in the community.

“We got the helping bug from our parents. Dad [Gordon] was frequently helping others, and Mum was often baking and giving it away, and we all now have a passion for this,” Pam said.

“I love baking – I absolutely love it when people see and enjoy the homemade goods in the cabinet,” Margaret said.

“Baking got me through the death of my husband and being busy with my sisters was therapeutic,” she said.

Pam said the cafe had been a place for each of them to get through hard times and support regular customers who came to the cafe for the company and a chat.

Some of the groups of women who gathered over coffee and a cake had grown larger over the years.

“It has been a safe place for people to talk and we listen and help,” she said.

“It has been particularly good for women who have become single when their husbands have died after a long time married,” Vicky said.

“Everyone was welcome, and we always make time to listen to others,” she said.

“It is now we are leaving that we see how much it has meant to our customers to come to a familiar place with familiar food and faces.”

On Monday night, they threw a farewell party to which more than 100 people came.

The sisters didn’t cry at the event, but Margaret dried her watery eyes behind the scenes before the evening began.

She was continuing to help for a short time to settle the new owners in.

The sisters’ advice to others who wanted to set up a business or were looking for a change was to do what you love.

“Life is too short.”