One of New Zealand’s oldest butcheries has been recognised once again for their award-winning sausages at the 2019 Devro Great New Zealand Sausage Competition on Thursday night.

The Greytown Butchery took home two silver medals for its beef flavoured sausage and continental fresh Moroccan lamb and raisins sausage, and one bronze medal for their BBQ pre-cooked sausage.

Owner Gavin Green said he was thrilled with the news. 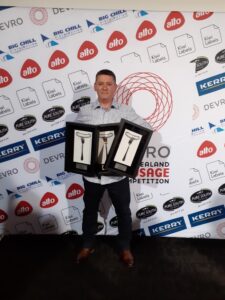 In 2017 they took out two gold medals, beef flavoured sausage and precooked saveloy, and one bronze for their black pudding sausage.

But since then, the competition has gotten tough, Green said.

He said last year was the first time they didn’t get a mention in 13 years.

“The competition is pretty tough these days, so any recognition is good.

“What was most exciting for me was the Moroccan lamb and raisins sausages being recognised.”

Having entered them eight years running, he was glad they finally won something.

“It was something I tried at a butchery in Sydney and thought I’ve got to bring that here,” he said.

The secret to their success was using locally mixed spices and quality meats from trusted providers around Wairarapa.

Butcher Steve Bailey said it was more due to Green’s passion for the industry.

“It’s great to work with someone like Gavin, who has the passion,” he said.

Having been in the industry for close to 50 years, Bailey said it was important for people to show plenty of love to their local butcheries as the industry was under pressure.

“We are still passionate about it and we love our customers. We get people from all around the place.”

To celebrate its success, the Greytown Butchery is hosting a sausage sizzle outside the store on Greytown’s Main St over the Labour Weekend.

The Overall Supreme winner went to Westmere Butchery whose chicken, leek and bacon sausage was named the tastiest sausage.

The beef, garden herb and garlic sausage from Avon’s Butchery was named the People’s Choice and the wild venison and black plum sausage from Peter Timbs Meats took out the Wild Card category.