The abbreviated rugby season has been an unmitigated success, writes CHRIS COGDALE.

What now for Wairarapa-Bush club rugby?

Clearly, the shortened season has been very successful.

The season was scheduled to start on April 4 and was to include two full rounds before semifinals and the finals on July 29.

The covid-19 level four lockdown in March forced the cancellation of all sport for nearly three months, with most codes eventually getting under way in June or July.

Club rugby kicked off a revised nine-week premier competition on July 4, featuring one full round plus semifinals and finals, scheduled for August 29.

That was later deferred a further week with the covid-19 level two restrictions in place.

The closeness of the competition was evident with seven teams in contention for the top four going into the final round of games.

The championship wrapped up on Saturday with a final for the ages, with Marist overcoming a 12-34 deficit from early in the second half to beat Greytown 39-37 with a stoppage-time penalty.

Wai-Bush chief executive officer Tony Hargood was thrilled with the standard of rugby and said there were some positives from the abridged championship. 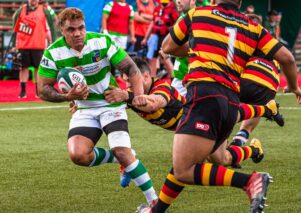 “Because of the intensity of the short competition, all teams were struggling with injuries, but at the end of the day everyone who stepped up was just brilliant, and if it delivers a final like that every year, you couldn’t ask for much else.

“There’s no question that the rugby has been fantastic this year, so how do we capture that and how do we continue to make a bloody good product?” he said.

Hargood said the Council of Clubs would now review the season and start planning for 2021.

“Our normal process is that we do a debrief with the club coaches and that will happen over the next couple of weeks,” he said.

“I think it will be fair to say that high on the agenda will be what does rugby look like going forward under covid. It has brought up a whole lot of new opportunities that weren’t clear before.”

So how does the season rate?

The standard was clearly higher than in past seasons, with better quality and more intense games.

That can probably be attributed in some part to players who would not have otherwise played making themselves available for the shortened season, although there were others who withdrew because of work and personal pressures.

In fact, one club, Tuhirangi withdrew from the Senior Reserve competition because of the impact the late finish to the season would have had on the club’s farming community, with calving and lambing in full swing in August.

It was clear that even though there were fewer games, clubs still struggled with a lack of depth in their squads, especially once injuries set in.

Pioneer struggled in their return to the premier championship and failed to win a game, Gladstone battled with their ageing squad and didn’t have the new blood coming into the team.

Eketahuna relied on several Manawatu-based players to boost their team.

Most of the other clubs had their respective injury crises throughout the season. How would the clubs have survived a 14-game competition?

Whether there are the numbers of quality players to maintain an eight-team premier competition is questionable.

Is it time to revisit the idea of a six-team premier championship?

Natural attrition may see that happen anyway, with the long-term future of some premier clubs looking shaky.

There are challenging times ahead in the changing face of the sport, and the clubs, the Council of Clubs, and Wai-Bush union have a challenging task ahead to come up with a worthy championship to match this season’s enthralling edition.