Sheep – the future of dairy? The Ravenwood’s have been out at Fernglen Farm in Homewood for more than 20 years. PHOTO/SUPPLIED

From gin and vodka, to soaps and creams, yoghurts and performance drinks — there are many uses for sheep’s milk. As international demand for sheep’s milk grows, New Zealand farmers are calling on others to enter the industry. GIANINA SCHWANECKE talks to Wairarapa sheep farmers ahead of the curve.

The Ravenwood family had been running a sheep and beef operation on Fernglen Farm, in Homewood, for close to 20 years when they decided to pivot and enter the sheep milk dairying industry.

Youngest son and manager, Cameron Ravenwood, said they made the change after reading an article about sheep milking four years ago. 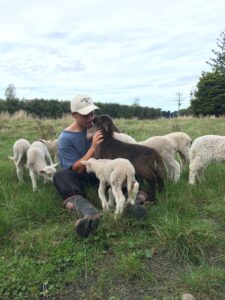 Cameron Ravenwood with the lambs. PHOTO/SUPPLIED

“I’m really interested in the nutrition and that side of things.

“Nutritionally sheep’s milk has double the protein of cow’s milk. It’s superior to most things out there.”

It contains three of the key amino acids and is more easily digested than cow’s milk.

“These are key for muscle recovery and growth,” Ravenwood said, and make sheep’s milk the perfect performance recovery drink.

“Growing up playing rugby and other sports representatively, chocolate milk was always seen as the best recovery drink.”

Ravenwood said athletes and the sporting industry had quickly come on board with the product, which comes in three flavours — chocolate, vanilla, and coffee, but they hoped for it to become a household drink too.

There are two main reactions from people when first trying sheep’s milk, he said.

“The first [are those] who will screw their nose up before giving it a try and end up being pleasantly surprised.

“Others are more curious because they’ve never seen it before.

“But people are opening up to the idea of sheep’s milk.”

With growing consumer demand for environmentally conscious products, there is huge potential for the expansion of the industry.

It has a relatively low environmental footprint as sheep produce fewer methane emissions than larger ruminants, like traditional dairy cows, and there is also less nitrate leaching involved.

Many farmers would be well positioned to move into sheep dairying, Ravenwood said.

The hardest part was learning the new skills and practices used in the dairy industry.

“We’d never dairy farmed before. I’d never even put cups on a cow.

“That was hard for us to get our head around.”

At the time there was also little information about how other farmers were doing it, but the knowledge gap was alleviated as the industry expanded.

“We think the industry just has such potential.”

He said transitioning from traditional sheep breeds to milking breeds was not difficult.

“They’re not as hearty as our conventional sheep,” he said with a laugh. “They need a bit more pampering.” They currently stock a range of breeds including east friesian, awassi, coopworth, poll dorset and crosses of each.

They carry around 1000 milking ewes, as well as younger stock with spring and autumn lambing.

Breeding through artificial insemination helps ensure strong genetics for the next generation and that they maximise milk productivity.

It’s not flavoured sports drinks they use the milk for though, but rather a colourful array of sheep’s milk soaps. 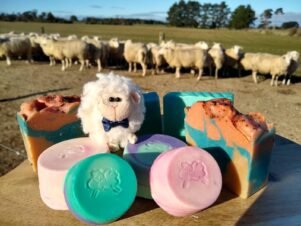 “Our soaps are really moisturising, and use all-natural products,” Russell explained.

“Sheep’s milk is quite well known for being packed with antioxidants, vitamins and minerals. It’s really gentle on your skin.”

The milk is frozen before being mixed with melted down oils, including locally sourced olive oils.

Water and lye are added, and later fragrance and colour.

The soaps are cold pressed and must be set for 24 to 48 hours.

They are then left for several weeks to cure and ensure they are not too soft.

“It can be a lengthy process,” she said.

They started with testing the product on local friends and family before expanding into retail centres across Wairarapa, including The Sanctuary and Room2Room in Masterton, Tryst in Carterton and Lang’s Pharmacy in Featherston.

“They’re so colourful, a lot of people think they’re something to eat,” she said with a laugh.

Their current range includes many different scents with additional ingredients such as coffee or tea tree adding their own characteristic benefits.

There are plans for Shepherds Milk Co to expand their line too, with the development of sheep’s milk shampoo for humans, and also for dogs. Janet and Miles King first started making their Kingsmeade cheeses using the milk from their east friesian sheep flock in the late 90s.

The pair were pioneers in their field.

They set out to explore the properties of sheep’s milk cheese, believing it was a “superior milk” – most of their information about making cheese from sheep’s milk had to come from the northern hemisphere, as the industry had not yet taken off further south.

“Our primary range of cheeses came from sheep and subsequently we realised that we had a wonderful market also in the Wairarapa for cow’s milk, so we took the cow’s milk on board and we have been making both kinds of cheeses for the past 20 years,” Janet said.

Their range has expanded to include 14 different varieties of sheep’s milk cheeses.