Sharpes still moving with the times 120 years on The next generation of Sharpes [from left]: Sam, William, Lucy, Olivia and Sara Orsborn. PHOTO/SUPPLIED

It might be celebrating 120 years of operation, but Sharpes Stock Feeds is still moving with the times.

The business was founded in 1899 by John Sharpe in Petone to cater to the needs of small farmers in the Hutt Valley.

Alan Orsborn bought the business in 1937.

He kept the name but moved the business base and manufacturing operation to Carterton in 1980 where his son Alastair took over.

A computerised batching plant was installed to increase rations in 1991, and a second production line installed in 2006.

It’s a move which has paid off, third-generation owner and operator Sam Orsborn said.

“It means we can produce calf and stock feeds, and pig and poultry feeds, under the same roof.

“That’s credit to Dad. He made a big call back then to develop another line in the mill.”

Sam joined the business almost nine years ago after 15 years working as a farm consultant for Baker and Associates.

“I’m born and bred here at Sharpes and on the farm,” he said. “It’s something I really enjoy.”

His dad is still involved though is starting to step back.

The business is in a period of transition, and expansion.

Sharpes Stock Feeds has grown a lot in the last few years, from a local Wairarapa focus, to now servicing farming communities across the lower north island – including Manawatu, Taranaki, and Hawke’s Bay.

They sell to a number of merchants but also direct to clients for bulk poultry feed such as local businesses Henergy Eggs and Wairarapa Eggs. Sam credited this largely to his wife Sara’s marketing and sales experience.

“It’s a great product to sell,” she said. “Sharpes is known for a consistent and quality product, made from local grains, and relationships are a big thing for us.”

“It was really special for the family and the business to be recognised like that,” Sara said. “It really came as a surprise to us as we do like to operate under the radar.”

The couple are also kept busy running the neighbouring 330-hectare family farm, with help from an “excellent” farm manager.

“We do something a bit unique,” Sam explained. “We take on new lambs from breeders and graze them. It enables those breeders to focus on their ewes and get well grown out two-tooths back, which increases performance on the breeder’s farms.

“We get paid on the weight gain and keep the lamb.”

Living next to the mill has its benefits and has helped as they oversee the expansion of the operation.

Each year they produce about 18,000 tonnes of stock feed for a range of different animals including, calf, dairy, stock, pig, poultry, horse, rabbit and pheasant feeds.

They’re even responsible for producing the specialist giraffe nuts for those at the Wellington and Auckland zoos.

“We have had the same recipes for many years and it’s well documented what animals need,” Sam said.

The pellets are made using recipes designed by Nutritech International to cater to each animal’s nutritional requirements. 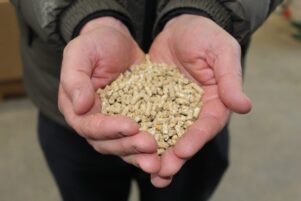 Stock feed pellets are made from a mix of grains including wheat, barley and maize. PHOTO/GIANINA SCHWANECKE

Each recipe comprises of a mix of grains including locally sourced wheat, barley and maize.

The grains are delivered to the feed mill on site and stored in grain silos, with a capacity of 1800 tonnes, until ready to be processed into stock feed.

One thing which won’t ever be found in their product is palm kernel, Sara said.

“We use only high-quality raw materials in our product, and we’ve constantly got fresh product coming in.”

Working longer hours during their busiest months, like in July and August as the calf rearing season gets underway, also ensures the freshness and quality of the feed.

Half the products are bagged to be sold to merchants, and the other half sold directly to commercial poultry and pig farms.

Despite Sharpes’ growth in recent years, they’ve managed to keep staffing levels about the same, further contributing to the family business feel of the operation.

Keeping up with technological changes and increased automation has been a big part of this, with current expansions paving the way for a new bagging system. 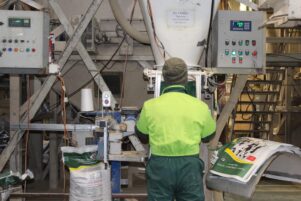 Changes in technology and increased automation have helped maximise efficiencies as the business has grown. PHOTO/GIANINA SCHWANECKE

Last month they launched a new mobile app, making it easier for farmers to order their feed.

“They can be ordering at night or from the middle of their calf pen,” Sara said. “It’s all about making it easier for them to order.

“It saves them making a phone call when they’re working or outside of business hours.”

The idea came from developing a mobile app for, yet another, business that Sam and Sara founded five years ago, called MyTrucking.

Working through the MyTrucking app development over the years, they realised it could also be a good option for Sharpes’ clients.

The app alerts farmers when an order has been dispatched, saving those in the office a phone call, and allows farmers to easily see their purchase history for ease of ordering.

Sara and Sam both laughed at that question, and it seemed clear they’ve still got plenty of projects and ideas to grow the business.

It also seemed likely that Sharpes Stock Feeds would continue to pass through the Orsborn family.

“We’ve got a daughter who likes to run the office,” Sara said. “She’s nine and loves it. She wants to be our Sharpes sales rep in years to come.”