Henry Wilson, with ball, will start at hooker for Wai-Bush. PHOTOS/FILE

A weakened Farriers Wairarapa-Bush will take the field for today’s Jeremy David Memorial Trophy match against Poverty Bay in Napier.

At least four players from the squad named last week by coaches Mark Rutene, Simon Wilson, and Nathan Riwai-Couch are out with injury or unavailable.

Outside back Moomoo Falaniko [fractured ankle], midfield back Robbie Anderson [hamstring], Tavita Isaac [concussion], and Jeramiah Mapusua [away with NZ Marist] are all out of the game, along with the four players of origin – fullback Tafa Tafa, wing Soli Malatai, midfield back Levi Harmon, and loose forward Joe Tako.

There are also doubts over the fitness of veteran lock Andrew McLean, props Chris Hemi and Tolu Fahamokioa. A question mark also hangs over former Poverty Bay representative Matt Raleigh, who has been named at fullback, subject to fitness. 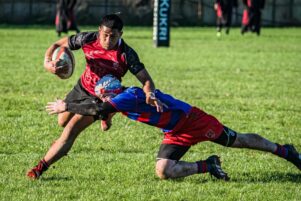 Fiula Tameilau, with ball, taking on a Pioneer defender, will get a chance to showcase his ability against Poverty Bay.

Falaniko’s injury has opened the door for rising star Carterton wing Fiula Tameilau, who proved his finishing prowess in an outstanding first season in the premier competition.

Rutene said the injuries, especially in the backline, haven’t helped the build-up but would give others opportunities, and he’s keen to test the talented Carterton outside back trio at provincial level.

“We’re having a look at Fiula, Aseri Waqa, and Aisea Sakopo. They are going to have a run for us probably in the second half, and one of them will maybe be in our group for six weeks,” he said.

“Those young fellas, it’s just a chance to see if they can step up to the next level, but they’ve only really had a diet of club rugby, so Poverty Bay will be a good test.”

The rest of the backline is predictable, with a strong inside back-midfield combination of in-form halfback Daryl Pickering, his Carterton clubmate Sam Morison at pivot and the experienced Martinborough pair of Tipene Haira and Tristan Flutey in the midfield.

Rutene knows little about Poverty Bay but said they, like Wai-Bush, are not using any import players.

“It will be good to play against another Heartland team that are just all local, so it should be a good match-up.”

Although keen to bag a win, Rutene is looking three weeks ahead and the start of the Heartland Championship at home to West Coast.

“A win is always important, but West Coast is our focus, so these games are about getting some combinations and to see what our best XV is going to look like, but it’s more about combinations and getting guys used to playing with each other.”

Today’s match will kick off at 2.30pm at Park Island, Napier.

The Wai-Bush Under-20s will play the curtain-raiser, also against Poverty Bay.

Substitutes to be confirmed.