Cape Palliser Rd took a battering this week. PHOTOS/GRACE PRIOR

Community left to pick up the pieces

They say lightning doesn’t strike twice, but heavy rain and flooding has again destroyed a small rural community in a matter of months.

Kilometres of fencelines have been wrecked, winter crops wiped out, and farmers on Kaiwhata Rd have been left to pick up the pieces after 120mm of rain fell in less than two days this week. Their road still remains closed and damage will be assessed when flooding clears.

Coastal roads such as Cape Palliser Rd also took a beating, but it was the residents on Kaiwhata Rd that were hardest hit.

And it’s not the first time.

They were left stranded for more than a week in November after a heavy downpour caused a slip that formed a dam and diverted the Kaiwhata River, flooding the area.

Back then, Kaiwhata Rd remained closed for more than a month, residents say.

Sheep and beef farmer Martin Byl, who lives in the rural Carterton community, said the damage to his property was worse this time around.

His woolshed is flooded, three hectares of new grass is under 61cm of silt, and paddocks are filled with forestry slash.

Residents and staff from regional and district councils worked to create a channel after the November flood to prevent a similar disaster.

But the water came too quickly on Tuesday, Byl said. Masterton’s average rainfall for June is 89mm, climate data shows.

But Byl recorded 52mm of rain on Sunday and another 70mm on Monday.

“The regional council were fairly slow getting in there and doing something … there are always thoughts like this after a flood.

“They’re doing all they can, and we’ve just got to be a little bit patient.”

Across Wairarapa, rural residents have banded together in the aftermath of the downpour.

Cape Palliser Rd was closed at Te Mahi Cres at midday on Monday and reopened on Tuesday. 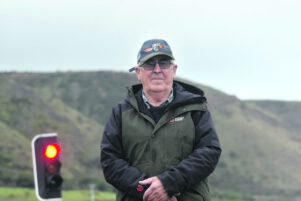 Palliser farmer and South Wairarapa councillor Brian Jephson said the flooding was nothing unusual for them but stressed the importance of resilience in rural communities.

“The country wouldn’t be where it is today without the rural sector,” he said.

Jephson has been farming the rough terrain of the Palliser coast for more than 30 years and remembered when the road was nothing more than shingle.

“Sometimes kids wouldn’t be able to go to school for a week because the road would be closed.”

Jephson had become used to culverts being cleared, joking to a road worker that he’d see him the next time it rained.

He said that the road was bound to be blocked because it was in the way of loose metal from the hills making its way to the sea.

Up the coast, residents in Tora had their power cut for more than 40 hours.

Powerco said the outage began at 10.37am on Monday morning, affecting 95 properties.

A field crew was dispatched to Tora Rd and found power lines had been blown into a tree.

A crew worked to clear the tree and repair the lines as safely as possible, river level permitting, a spokesperson said.

Te Awaiti holiday homeowner Tim Pankhurst, who lives near Tora, said the power shut off just after 8pm on Sunday.

“We were in the dark and cold with no heating; our freezer was defrosting,” he said.

A Powerco spokesperson said power was restored to 24 customers by 4.20pm on Monday.

They expected the remaining 71 customers to be restored by 4pm Tuesday.

It is understood power was still not restored to these Tora residents at the time of publication.

The Times-Age asked South Wairarapa District Council how many service requests they had received since Saturday, but a spokesperson could not confirm this because of “considerable pressure” due to weather-related events.

Carterton also could not confirm the number of service requests since Saturday at time of publication.