New studies into the behaviour of tree weta allow for monitoring of the species without the need to kill them. And, as GRACE PRIOR discovers, nail polish was an unusual tool in the research.

A study by Massey University biologists, published in the New Zealand Journal of Zoology, found that half of the tree weta hiding inside refuge boxes during the day returned home to the same box each night.

Professor Mary Morgan-Richards said the behaviour was uncommon in insects.

Documenting changes in insect populations in forest reserves usually meant “large numbers” of weta would be killed so they could be stored, sorted, identified, and counted.

Now, weta could be monitored without killing them because they would return to the same daytime refuge over months. 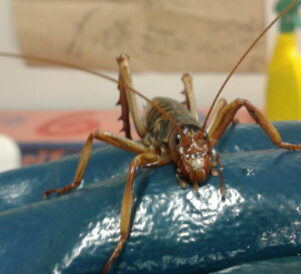 A resident found this weta stuck inside Multisport Sports Stadium in Pahiatua.

“By marking each tree weta with a unique colour and pattern combination of nail polish, the researchers discovered that males and females of all ages return home to the same refuge, which in this instance were wooden artificial tree-cavity-boxes [weta galleries] fixed to tree trunks.”

She said the nocturnal insects were out in the trees eating leaves at night and sheltering in their galleries by day.

Morgan-Richards said keeping an eye on weta and other species was an important step in assessing the success of programmes that had reduced or removed invasive mammal species from forests.

Programmes like Wairarapa’s Pukaha monitored weta while restoring its ecosystem.

Pukaha said on its website that many of the nation’s precious weta were in a critical situation and could do with a helping hand.

“The largest, what we call wetapunga, is also our most critically endangered and today survives only on offshore, predator-free islands.

“Many other types of giant weta and tusked weta are also struggling.”

Pukaha said there were five categories of weta: tusked, tree, cave, giant, and ground. Some differences among the species were minor.

New Zealand weta evolved, along with many birds, after the separation of continents some 200 million years ago.

“Without any mammals, besides a few species of bat, the weta moved down two paths, developing into two families, the Anostostomatidae and the Rhaphidophoridae.

From the two families, more than 100 species of weta had evolved. Pukaha said this formed the “eclectic” mix of weta species we could see today.

However, the fierce-looking bugs were not without threats. Having evolved without mammal predators such as rats, hedgehogs, and cats, the population had since declined.

They said 50 or more galleries should be set up, and weta occupancy should be recorded at the same time of year, once a year.