Roger commits from a distance Each week, the Wairarapa Midweek will profile one of Wairarapa’s political candidates. This week, LISA URBANI talks with Roger Greenslade.

Unusually – but such is his commitment – Roger Greenslade, ACT Party candidate for Wairarapa, is standing for election from his home in Thailand. 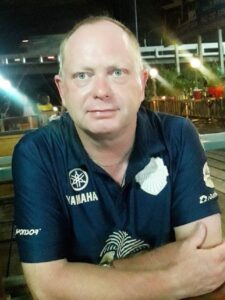 Roger Greenslade, ACT Party candidate for Wairarapa in Thailand, where he is working.

Regarding potentially serving Wairarapa from afar, he said he was “campaigning for the party vote only”.

“Standing abroad is limited but allows me to act as a contact point for those wanting more information about our policies.”

Roger was never really interested in politics until he had children and began to think about the future and take his voting responsibilities more seriously, reading up on the different party policies.

He works at Assumption College in Sumut Sakhon, as the Head of Content – Mathematics.

His teaching career began at Wairarapa College in Masterton, 19 years ago.

Having grown up in Nelson, he had a 10-year career working in supermarkets in Nelson, Auckland and Christchurch, mainly in middle management, which gave him good people and administrative skills.

At the age of 28, he decided to study at Lincoln University, doing a degree in commerce and management, majoring in business administration, but also studying computing, in order to move into the corporate side of retail management.

Acting as a tutor for the computer science department inspired him to want to gain his teaching qualification.

Although he rose rapidly in the ranks at Waicol, being head of department after only two years – after 15 years there in various departments – including, economics, maths, computers and commerce – he began to consider his options.

He did try working as a real estate agent for two and a half years while also doing relief and part-time teaching but had never travelled beyond the east coast of Australia, and the idea of teaching overseas was appealing.

After his separation from his wife, Roger had shared care of his two children, but later as teenagers, they did not want to travel back and forth between their parents and elected to live with their mother.

They fully supported their father’s decision to teach overseas and after first trying a stint in China and then a year relief teaching in Perth in 2017 – during which he also stood for the election as ACT Party candidate for Wairarapa – he then took up a position at a school in Buriram, Thailand for six months, before joining Assumption College, where he has been ever since. 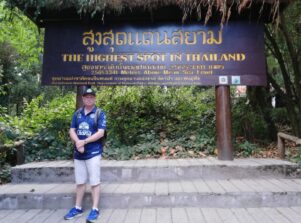 Roger Greenslade, enjoying the sights in Thailand, where he is working.

“My initial plan was an 18-month contract in China, but almost four years later I’m still not home and I’m no longer registered to teach in New Zealand, so while I’m keen to return at some date my options are limited.
I have a good job here and enjoy life in Thailand.

“Teaching can be a very rewarding career, and I enjoy passing on knowledge and equipping students with the skills to learn and seeing them develop as independent learners.”

Despite a population of almost 70 million, Thailand has fared well during the covid-19 lockdown by responding very quickly, having a partial lockdown and many restrictions.

Like New Zealand, they have escaped widespread community transmission and life is starting to return to normal, although everyone wears masks and practises social distancing.

Thailand has great weather, friendly people, a laid- back lifestyle and many attractions, so Roger has travelled widely and enjoys going for walks and lazing on a beach with his Thai partner Suphichnan, when he has spare time.

He does not earn a lot of money in New Zealand terms, but says he leads a comfortable life because the cost of living is so reasonable.

For example, Roger rents a three- bedroom modern house for NZ$450 a month.

Although he had planned to visit New Zealand this year, the quarantine issues would not make it feasible, but he does have a long list of things he misses about Wairarapa.

“My children, friends, and socialising at the Services Club; the quieter way of life, the fresh air, surrounded by the scenic countryside and the Tararuas; swimming in the rivers and trips to Castlepoint and Riversdale beaches; and walks around Henley Lake and living in a town without traffic lights.”