Risky road to the coast Mike Firth, a farmer, volunteer firefighter, and chair of the Tuturumuri Hall Society, had made regular public submissions at meetings asking SWDC to repair and upgrade the roads to Te Awaiti.

Firth said the two roads were built many years ago to service the mainly farming communities at that time and were no longer fit for purpose.

“It is now a coastal destination as well as a rural area. There are lots of subdivisions, and it is a popular destination for visitors,” he said.

“It has one of the only boat ramps in the area, which generates a lot of traffic. The road is maintained by the council, but not enough for the level of use it gets.

“The road is corrugated, and many times of the year, it turns to mud. There are few warning signs.”

“The car swerved and went down the bank. It hit the gravel and rolled down towards the river.”

He said the two occupants had been lucky to escape injury.

“There was no warning sign advising them to slow down.”

He said there had been about four serious crashes in the area in the past year, with most vehicles leaving the road and going down banks. 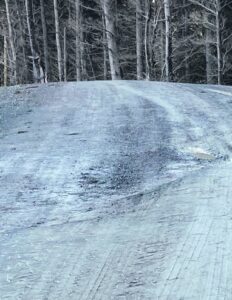 Over the Christmas holidays, Firth estimated more than 200 campers had visited the area, with up to 60 recreational divers and about 50 boats a day using the roads to access popular coastal spots.

He said SWDC needed to do more work on the roads before someone was seriously injured or worse.

“The council have approved subdivisions without upgrading the roading quality. They need to hold their contract with Fulton Hogan to account.”

Concerns about the unsealed Ruakokoputuna Rd to the popular chasm attraction near Martinborough had also been raised in the past, with residents reporting vehicles crashing off the gravel road down steep adjacent banks.

“We’ve had no reports of safety concerns or accidents on the roads mentioned this summer, but if there are concerns, we encourage people to let the council know,” he said.

“We do acknowledge that there can be issues with unsealed roads, and the recent dry conditions have made maintenance difficult, as the ground is so dry there is little to no moisture for the gravel and clay underneath to bond.

“In terms of safety, the total number of crashes on South Wairarapa roads in the past decade was below rural, Wellington and national averages.”