Jacob Davies one day before the competition, at Gladstone getting familiar with the road. PHOTO/ALEYNA MARTINEZ

“I just remember hitting a bump in the road, then the handlebars jittered, and everything went blank after that.”

So said former Rathkeale College student and Masterton motorcyclist Jacob Davies who entered his first hill climb at the weekend at the annual Cliffhanger Hillclimb in Gladstone.

By the afternoon, he’d completed several runs, each with a time improvement.

On his sixth run, close to the finish line and clocking about 160kmh, he hit a bump in the road which caused his newly bought Yamaha FZR250R to lose balance, throwing Davies on to the road and knocking him unconscious.

“You need to be aware when you’re riding,” Davies said in an interview just before the crash.

“Good driving is the result of a certain focus between your mind and the road, the only thing that matters is the task ahead.

“You’ve got your helmet on, and all you hear is the engine.

“You have to focus, and it’s crucial you do because a slip-up between that focus and any distraction like an argument with someone or other life stresses could mean life or death for a motorcyclist.

“It’s a no-brainer wearing a helmet – after you have had a few crashes, you realise how important all the gear is.” 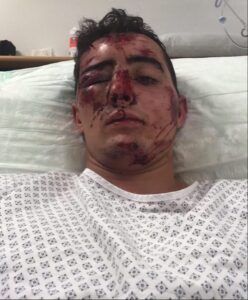 Jacob Davies from hospital said these things happen in the sport and he’s going to come back to the Hillclimb next year with a bigger bike. PHOTO/SUPPLIED

Although the medic on site said his helmet was done up on the inside, it wasn’t securely fastened, which caused it to fly off during impact.

Sitting in the medic station at the start line, after being picked up off the track, Davies couldn’t initially remember what had happened.

Waiting for ambulance officers to arrive, all he knew was he needed to call his mate Mitch and could he please have some codeine and a cigarette.

No and no were the answers in case he needed surgery.

“We need to take you to the hospital for a routine CT scan because you’ve suffered a head injury,” Davies was told by ambulance staff.

He was then flown to Wellington Hospital in a Westpac Life Flight rescue helicopter.

“These things happen”, Davies told the Times-Age from hospital, “I’m honestly sweet as”.

The only one of his friends to show up for the 8am race registration on Sunday morning, Davies takes leadership in motorcycling because it’s an outlet, for him riding is a mental release from stress.

Motorcycling is something he and his father, who died of lung cancer two years ago, shared for more than 10 years.

Davies told the Times-Age after he was discharged, “I’m just going to get a bigger bike for next year”.

“Mum’s not very happy, but I think she also understands,” he said.

For now, he’s not allowed to drive and will stay with his mum in Upper Hutt to recover.

Coinciding with the covid-19 national lockdown, his full-time job as an electrician counts as a non-essential service and he was about to get a break anyway.

“When you crash on a motorbike, you’re thrown on the road, and you slide – you get something called a road rash, and it’s really nasty … I’ve had it a couple of times.”

Davies said he wanted to return to the hillclimb in 2021 with a Kawasaki 250 Inline 4.

“When you fall off, it might not be that day, but you get back up and try again, it’s about just getting up and giving it another shot,” Davies said.