The Great Eketahuna Cheese Festival is back for its second year with an array of cheesemakers and industry leaders set to flock to the small town at the end of the month.

Around 300 people attended the event last year, and event organisers Denise Clifton and Calum Hodgson are expecting a similar turnout this year.

This will also be the first year without Eketahuna’s Cwmglyn Farmhouse Cheese owner Biddy Fraser-Davies, who passed away last July.

Her cheese appeared in many high-profile places, including on top Auckland restaurant menus, and at Prince Georges’ Government House playdate in 2014, when she also won a super gold award at the 2014 World Cheese Awards in London with her traditional Cwmglyn farmhouse cheese.

But she is perhaps best remembered as a champion for the artisan and farmhouse cheesemaker industry, advocating for the Ministry of Primary Industries to develop a risk management template for farmhouse cheese designed to support small operators.

An Eketahuna native herself, Clifton worked with Fraser-Davies for around 10 years, learning the art of a good farmhouse cheese. 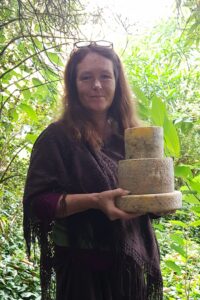 “The cheeses I make are me having a go at making farmstead cheeses.”

The secret to a good cheese is excellent hygiene and really good quality milk, she said.

“Good milk is what makes good cheese. That’s why a lot of cheesemakers have their own herds.”

She said she was surprised at how many people came out to a small town like Eketahuna for the cheese festival.

“It also gives makers the chance to meet their market directly.”

Aucklander Calum Hodgson has been in the industry for close to 15 years, having first started in the UK.

He and Fraser-Davies had never met in person but had been friends for three years before they decided to organise last year’s event, co-ordinating it so that it fell on her 76th birthday and in her hometown.

“The festival kind of happened by accident,” he said.

“It’s unique that a town like Eketahuna has that sort of gravity.

“It’s testament to the work that Biddy did and there’s definitely a demand from cheesemakers.”

Hodgson said the festival was a good opportunity for start-up cheesemakers to get some feedback on their cheeses before entering the market.

“It’s good for the customer to make the connection that there are a thriving community of farmers and producers feeding us,” Clifton said.

“That’s always been the focus — for start-ups to get some feedback and feel the love.”

Cheese varieties will include a range of soft, hard, blue and other flavoured cheeses, as well as Buffalo, goat, and even deer milk cheeses.

The event is an opportunity for people to learn more about the industry with a dedicated trade section, as well as have some fun rolling wheels of cheese as part of the Great Eketahuna Cheese Race and enjoying the popular Swiss dish, Raclette – where a wheel of cheese is slowly melted, progressively sliced.