Living rurally in Tauherenikau, Wendy Allison is well prepared to store rubbish and recycling for up to three months, but without access to the tip her bins are close to bursting. PHOTOS/SUPPLIED

Three weeks into the covid-19 lockdown, many people’s bins are likely close to overflowing with bottles, empty cans, and other recycling in need of processing – but for those living rurally it’s especially difficult without access to the tip.

Wendy Allison and her husband live on a four-hectare lifestyle block in Tauherenikau.

Living rurally, she said they were accustomed to storing rubbish for about two months before taking it to the refuse centre and had the capacity to store for up to three months.

However, their last trip was in February and things were now starting to pile up, with the access to the refuse centre restricted to essential services only.

“It’s the smallest amount of rubbish we could create but we didn’t get a chance to offload it before the lockdown began.”

A brochure provided by the council to rural residents about how to store rubbish and recycling during the lockdown was “patronising”, she said.

“We already know how to do it. We already compost food waste, cardboard and other organic materials

“We sort and wash all the recycling and store it in wool fadges and bins with lids.

“The only thing we don’t deal with is household refuse like potato chip bags and meat packets.”

Storing household refuse and other rubbish poses a health risk in itself as it attracts vermin.

Allison said their rubbish was vermin proof but only as long as they could close the bins properly and they were quickly running out of room.

Already, she had seen an increase in rodents, with two mice caught in one trap. 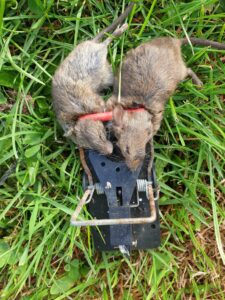 Already she had seen an increase in rodents, with two mice caught in one trap.

She said the approach in Wairarapa was “very harsh”, and suggested councils looked at what other alternatives were available such as strategically placed skip bins or allowing rural residents to use official bags to drop refuse off for recycling.

“What happens if the lockdown is extended? Eventually people need to go to the tip.”

Allison worried without an alternative, there would be an increase in rubbish dumping, burning and burying which are all harmful for the environment.

Another rural South Wairarapa resident, who the Times-Age has agreed not to name, said their rubbish was also starting to build up.

They raised particular concerns about increased vermin in relation to a commercial kitchen they operated, and doubted they would pass inspection.

“We can’t even get more [traps and pest control] at the moment.”

They said a “10-minute trip” to the dump would be great.

Kerbside recycling restarted on Tuesday – cardboard, glass, and plastics had not been collected across the region since the covid-19 lockdown began.

Council bin bags have been collected in Wairarapa’s towns, but transfer stations have remained closed, and there is no collection for rural addresses.

Kath Ross, speaking on behalf of Masterton, Carterton and South Wairarapa district councils, earlier told the Times-Age she was grateful for residents’ patience.

“We needed to make sure our contractors could safely pickup and process recycling under the current covid-19 measures.”

The two-week break in collecting recycling was to ensure appropriate safeguards against covid-19 were in place.

All transfer stations in Wairarapa remain closed to all but essential services.