Disgruntled residents call meeting on artwork in the square

Disgruntled Martinborough residents concerned about lack of public consultation by South Wairarapa District Council about new artwork at Memorial Square will have an opportunity to have their say at a public meeting early next month.

Meeting organiser Stuart Campbell said he decided to arrange the meeting after the Martinborough Community Board meeting last month. More than 50 angry residents attended to protest aspects of the ‘Innovating Streets’ programme. 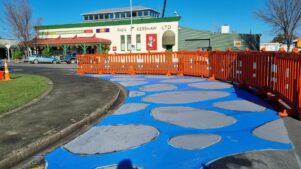 Artwork being painted on the road in front of the town’s iconic Memorial Square is part of the Waka Kotahi New Zealand Transport Agency-sponsored nationwide programme to enhance urban areas and improve safety, among other things.

“I did an online survey on Facebook. Over 200 wanted an urgent meeting with the council,” Campbell said.

While he agreed the council had held engagement sessions, they had not reached enough people.

“People have not been given a substantive way to give feedback. There was a public vote on three designs to choose from, but no option to choose ‘none of the above’. You should tailor communications to the audience.

“They have drip-fed information without coming out and saying what they were planning to do. People didn’t get excited until they could actually see what was happening,” he said.

Campbell will invite every SWDC councillor, the Martinborough Community Board and the public.

He wanted a clear path for the community to have its voice heard and listened to.

“A lot of people are dissatisfied with the reach of the current process. There has been consultation, but I don’t believe it has been very effective or broad enough. I want council to learn something from this process,” he said.

“This will be a public meeting, not a meeting in public.”

On Wednesday, Mel Maynard, chair of the Martinborough Community Board, told SWDC the board had passed a motion of no confidence last month in the engagement by SWDC with it about Innovating Streets.

“We would like council to seriously consider our road safety requests that were made through the assets and services committee. In particular, the safety on our pedestrian crossings, two of which we have reported are on the square but are not addressed by the Innovating Streets fund. I think that is a by-product of not having a community voice at the table.

“We have been assured this remains an eight-week project from the time it is installed,” she said.

A spokesperson for SWDC previously said there had been a range of public communications about the project.

Council had invited NZTA to discuss safety, among other things, and the Innovating Streets programme had been proposed.

“Although there have not been serious accidents, we often hear of near-misses. In addition, the pedestrian crossings are not always easy to see for some drivers.

“Public were informed and consulted via a series of online, print media and face-to-face sessions: workshops, community engagement sessions in the square, social media posts, newspaper articles, website updates, and an online and hard copy survey over two months.

The artwork on the street was a trial, after which residents would be able to vote on whether to keep it.

The meeting will be at the Martinborough Town Hall at 6.30pm on August 9. People wanting to speak are asked to email scampbell@campbell.co.nz to arrange it in advance.