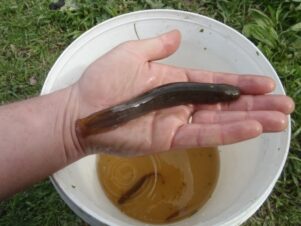 Samples of mudfish taken from the Carterton wastewater treatment plant.

A new pond with drainage designed especially for native brown mudfish has been created at Carterton’s under-construction wastewater treatment plant.

But attempting to keep the mudfish [discovered before construction began] alive has cost hundreds of mudfish lives and has cost the Carterton District Council more than $120,000.

To make way for the treatment plant, the habitat of at least 900 endangered mudfish was set to be altered.

The fish were rehomed but most of them died.

CDC infrastructure, services, and regulatory manager Dave Gittings said at the time of the deaths, “It is very important that the council continues to do the right thing by working with Greater Wellington Regional Council on the well-being of the mudfish, which fall under the same protection classification as the kiwi”.

GWRC has 30 saved mudfish in a tank in its Masterton office.

It is possible these fish will be used for breeding and restocking the population.

GWRC environmental scientist Alton Perrie said since last year’s population demise, it had focused on ensuring it could provide the conditions for a thriving population at the site.

It has been monitoring nearby environments where other populations of mudfish are living.

“This has involved creating a new network of drains that best mirrors the original drain habitat that the mudfish were living in,” Perrie said.

“The approach has been peer reviewed by a mudfish specialist and we believe provides the best chance of creating suitable mudfish habitat in a highly modified landscape.

“We’ve yet to make a decision on how rebuilding the population will best take place and will be discussing this further with the Department of Conservation and other scientists with mudfish translocation experience.”

Perrie said it may be years until the habitat was right and until then, the 30 would remain in captivity at the GWRC tank in Masterton.

As the project progresses, the council said it would recover any remaining mudfish it found, as well as monitor the remaining rehomed population.

They are eel-like in appearance, with long, stocky bodies, thick slippery skin, and no scales.

When their wetland habitats dry out in summer, they burrow into the soil and remain there, motionless, breathing air, until the first decent flood of autumn refills the wetland and washes them from their refuge.

Few fish species worldwide have such ability to survive for extended periods out of water.