A patient is carried from scene of a motor vehicle incident in Pirinoa. PHOTOS/ LIFE FLIGHT TRUST

Life Flight’s Westpac Rescue Helicopter was kept busy during the ANZAC weekend with 15 callouts, half of which were in Wairarapa.

On Saturday, April 24, the helicopter was dispatched to Cape Palliser at about midnight to help someone with moderate injuries sustained in a fall.

Just before 6pm it was sent to the South Wairarapa coast to assist with serious injuries.

Then, at 9.16pm, its crew attended a motor vehicle accident in Masterton where someone was assessed with critical injuries.

The following day, Life Flight attended a further three incidents. The first, at 7.34am involved a medical incident in South Wairarapa.

“I would say in general it’s probably one of the busier [Anzac] weekends in quite some years,” the crewman of 12 years said.

“Thankfully, nothing too major out of it all.” 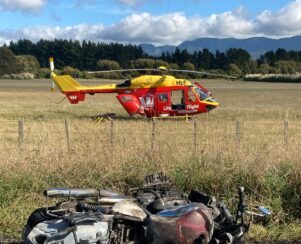 The Westpac Rescue Helicopter flies a patient from the scene of a motor vehicle incident in Pirinoa.

Just after 10am the helicopter was dispatched to Pirinoa to attend a motor vehicle accident.

“A solo rider came off his bike and clipped another small bike, which was turning into a farm,” Larsen said.

“The road actually seemed quite busy, it was along the main road to Lake Ferry.”

The bike had caught fire, with the bystanders who had called emergency services pulling the rider away.

“All in all, he was very lucky considering the state of his motorbike, to walk away with relatively moderate injuries.”

The rider was treated on scene and then taken to Wellington Hospital.

A police spokesperson previously said the rider of the other bike was transported by road to Hutt Hospital.

At about 5pm on the same day, the rescue helicopter was enroute to a medical event in Whakataki when it was stood down. Life Flight conducted a search and rescue of an injured walker in the Orongorongo Valley.

The helicopter was also dispatched but stood down enroute on Monday April 26, while travelling to an injury in Cape Palliser.

Just outside the region, a call came from the nearby Remutaka Ranges to assist with the search and rescue of injured walker in the Orongorongo Valley on Anzac Day afternoon [April 25].

Larsen said there were no identifiable trends or safety concerns which had caused the collection of incidents.

“No particular reason that we could figure,” he said.

“We’ve been looking for trends for years, there never are any.”