Masterton has farewelled its favourite son, Sir Brian Lochore, with the help of a large collection of former All Blacks, a tonne of respect, and plenty of humour.

From an underweight infant who fancied himself as a jockey, to a physical and metaphorical giant, Sir Brian’s humble nature was highlighted at his funeral on Wednesday, as was his gift of making everyone he met feel important. 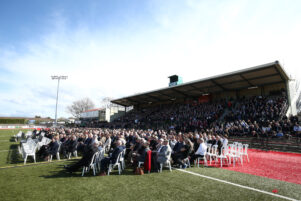 His Memorial Park stamping ground, and the stand that bears his name, was near capacity to say haere ra to a “great kauri”.

Family, friends, players and supporters from across the country heard touching tributes from his son, David, the Rev Steve Thomson, long-time mate Ivan Grieve, his doctor and golf buddy Aage Terpstra, and Gilbert Enoka, the All Blacks’ mental skills coach, who represented the squad preparing in Perth for the first Bledisloe Cup test against Australia.

Prime Minister Jacinda Ardern joined Wairarapa MPs, and the region’s mayors in attendance, but this was a chance for family and friends to take centre stage in farewelling Sir Brian.

Mourners from as far as Dunedin and Auckland arrived in midday sunshine, as did schoolmates of Sir Brian’s

Thomson said Sir Brian spent his first two years as a townie “and for the next 76 years he was very much a country boy”.

He gave the description of a “busy child – code for pain in the backside, who constantly found his boundless energy got him into daily strife”, a Shetland pony called Winkle, who sparked Sir Brian’s initial sport ambitions to be a jockey.

There was talk of the Kumara Club, described by David, as “recycled teenagers”. It was first formed to attend the 1991 Rugby World Cup, in UK and France. Sir Brian was the club’s “ambassador” who set
“giant standards”.

Masterton-born Enoka described how he had been privileged to work with his ‘boyhood hero’, who then became a friend.

Enoka said the All Blacks would wear the number, 637, on their sleeves as a tribute to Sir Brian in tonight’s match against Australia.

He said that when they worked together, BJ called me ‘the shrink’ and himself the ‘bush psychologist’.

“Together, we went about our work. It certainly was the odd couple. What a beginning. But what a journey we went on.

“And what a bush psychologist he was. He was a living example of the fact that you don’t have to have academic degrees to have knowledge and wisdom.”

Enoka explained Sir Brian’s influence on the All Blacks’ culture.

“He was the author of the phrase ‘better people make better All Blacks’.

Terpstra described how the determination and fierce sportsmanship which saw him rise to top of the rugby world carried on to his other sporting passions, such as golf.

“I’ll always remember him at the 19th,” he said, “with a beer in his hand, and a group of very diverse friends from all walks of life who got together on a Sunday afternoon to play golf somewhere in Wairarapa or on a trip.”

The most touching tribute came from David.

The younger Lochore spoke of a beloved and loving family man, his farming skills, and some moments of fun in family life.

He had toured and visited wonderful places, “but chose to live his whole life in the shadow of the Tararuas”.

As with all speakers, he paid tribute to his mother, Lady Pam.

The casket left the stadium after the hymn, Guide Me, O Thou Great Jehovah, with the hearse passing through an honour guard of All Blacks legends, pausing as pupils from Sir Brian’s alma mater, Wairarapa College delivered a stirring haka.

Sir Brian Lochore: In their words

“He was a man of mana. He was man that was able to talk to individuals — it didn’t matter who you were. He was able to bring all of us from our own different spheres of influence and make us a team.” – Carl Baker, member of 1981 Wairarapa-Bush team who won promotion to the first division

“He was the father of the modern game. I can remember the big fatties in the front row out there passing the ball like backs. When we teamed up for things it was always about us. It was about us as a team. There were no I’s in our rugby team.” – Bob Pringle, Masterton Rugby Club and Wairarapa teammate.

“I think he believed in me, he saw something in me and I think that was one of the great gifts of Sir BJ – that he saw potential in people and then he just invested his time to bring out the best in them, whether it be as an All Black or a Wairarapa College student, or someone at the tennis club or wherever. That’s the mark of the man.” – Sir Michael Jones, member of 1987 World Cup winning team

“I was lucky enough to have one test with him. He was pulled into the team [third test against the Lions,1971] and he‘s been a friend ever since. He was a great man, smart. People would go to the trenches with him and he’d be up front.” – Tane Norton, All Black 1971-77

“The thing I remember about BJ was my first All Blacks trial at Palmerston North. I’d played six games for Varsity and I got thrown in the trials. I made a break and BJ was as usual corner-flagging, and I just thought, ‘Don’t look in his eyes; I just sidestepped him and I was away’. To me the best achievement for BJ was getting Wairarapa-Bush to the first division and keeping them there; now that’s real coaching.” – Grahame Thorne, All Black 1967-70

“He played a massive part of me staying here in 1996. I got an offer from Wellington and was picked in the Lions’ squad to go to New South Wales. Dad and I went to him see if it was a good idea and he thought that it wasn’t. He thought I’d get chewed up down there and he thought I needed another season here and thankfully that advice I took. He basically had that aura about him. Whatever he said, everyone stopped and listened. He didn’t say a lot of words but what he said resonated with everyone. He was famous for the two arms and legs speech; if we were playing a big opposition like Wellington, he would just say, ‘They’re like you and I, two arms and two legs’.” – Mark Childs, Wairarapa-Bush, 1990s

“As a player I admired him. I played a fair bit under him. I always enjoyed playing against him. I always knew where the ball was; it would be with BJ somewhere. He always treated everybody equally and it didn’t matter who you were or what you said, he was always the same, he never changed. There’s never going to be anybody like him, never again. Well, not in my time anyway.” – Dermott Payton, Wairarapa teammate and club opponent