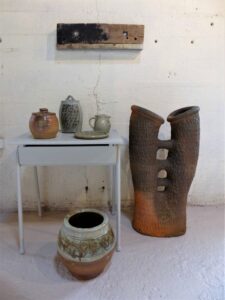 Potter John de Joux is being remembered in a retrospective exhibition at Mazzola Jewellery & Gallery in Featherston over the coming month.

De Joux, who passed away in March last year, was an active professional potter in Wairarapa from the early 1970s to early 1990s.

During this time, he lived near Featherston, first along the Featherston-Martinborough highway for several years, and for a longer period of time on Boundary Road.

During the early part of his career, De Joux focused mainly on domestic pottery such as bowls, plates, cups, vessels and dishes until the mid-1980s when the economy’s opening up to cheap foreign imports decimated the New Zealand pottery industry.

De Joux then changed tack to large sculptural forms for the garden which he continued to make part time after being employed in the Martinborough wine industry from the early 1990s, before giving up pottery altogether.

After his retirement from working in the vineyards, de Joux was a weekly visitor to the gallery. He would share his views on art and life with the gallery director, David Famularo.

“John de Joux was well known in Featherston and the wider Wairarapa community for his engagement with the arts, music and people in general,” Famularo said.

“John was always modest about his work and never signed his pots, but they were of an equal standard to the work of many other better-known potters working at the same time in New Zealand.

“Furthermore, John was part of small group of artisans working in Wairarapa in the 1970s and 1980s.

“While the work of the other artisans has been recorded for posterity, John went largely under the radar of the art community.

“Hence this exhibition, and a small book to follow, to record the memory of John and his work as a potter, at least as a part of Wairarapa’s arts and craft history.”

The works in the exhibition were all that remained on de Joux’s property from when he practised pottery.

Most were for viewing only but there would be six large pots for sale.

Mazzola Jewellery & Gallery would open on both Saturdays and Sundays for the next month for the exhibition.

The gallery would also be showing a small exhibition ‘Exposition de Petite Cartes’, by Famularo.

“These are small works using material from the local ‘$2 shop’ which capture the mood of the just-ended Christmas holidays.

“They are nice and fresh and happy.”

Mazzola Jewellery & Gallery is located on the corner of Fitzherbert St and Boundary Rd.