Former Black Stick happy to be back on old stamping ground

Reuniting with the girls she played age-group hockey with is the biggest buzz for former Black Stick Felicity Reidy, who has joined the Daleﬁeld team competing in the Wellington women’s premiership.

“For me, it’s exciting to be playing with the girls I grew up with, like Katherine, Jenna and Morgs, and Brigitte Mossman.

“What’s cool is that although I haven’t played with them for a very long time, the connections haven’t stopped.

Waicol’s victory at New Zealand’s premier secondary schoolgirls’ tournament, the Federation Cup in 2011, Reidy’s last year at school, was a highlight, as was a win over Auckland that year.

“We’d played rep hockey together since we were 10, and it was the same 16 girls that showed up every year, and we would literally be playing off for last place.

“Our last year of Under-18s was definitely a highlight as we got third.

“We played Auckland and they had won it the previous year and us from just little old Wairarapa we ended up beating them by something like 5-2. They didn’t even know where Wairarapa was.”

On leaving school, Reidy joined the Harbour City club in Wellington, but she has had a long-held desire to play for Dalefield. 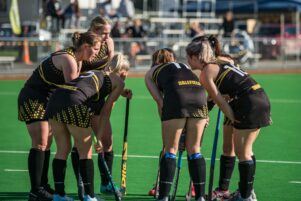 Dalefield women’s team go into a huddle during Saturday’s Wellington premier game against Harbour City which they won 5-2 at Clareville.

“Last year, I noticed that Dalefield were quite a young side and growing up in Wairarapa I always heard about them and I’m pretty sure mum would take me along and watch some of their games.

“But they didn’t have a team when I left school, so I just joined up with some of the other Wairarapa girls who played for Harbour City.”

Reidy works for Wellington City Council in the public health team and splits her work week between her Wairarapa home and travelling to Wellington.

A chance meeting with van Woerkom set in place a possible transfer to Dalefield for the 26-year-old.

“I bumped into Katherine in the supermarket, and I said just keep me in the loop about Dalefield.

“I thought it would kind of be cool to play for them and bring back my knowledge from my other teams and a pass it on to the younger girls.

“I played for Harbour City since when I first moved down to Wellington and in the past two years, we won it [the championship], and it was quite cool because we hadn’t won it before, so it was a tough decision, because I’m quite a loyal person.”

After two minutes of Saturday’s game and trailing 0-2 against her old club, Reidy may have wondered if she had made the right decision.

“To come back and win 5-2 was quite nice, and that’s quite hard to do, especially with a new team just put together with not a lot of prep.

“We found our groove and got connections going quite early considering that we’d never played together.”

Reidy scored two goals in the win but heaped praise on her teammates.

“The young girls really stepped up. That was exciting and I think it’s even more exciting to know that that was our benchmark and what’s to come. It was really impressive.” Reidy made her debut for New Zealand in 2016 and was part of the team who had a rare series win over Australia.

After losing the first test 6-0, the Black Sticks won the second test 2-0 and the third test 3-2.

“You just get the exposure to different styles of hockey I guess and coming up against something that is not like the Kiwi way of playing. It was such a learning experience and you start to develop your game because of the different structures and different playing styles,” she said.

During her short period with the Black Sticks, Reidy came under the coaching of long-term coach Australian Mark Hager, who resigned in 2019 over allegations of bullying.

However, she was unaware of any bullying in her time with the team and believed that it unfolded after her return to Wellington from Auckland.

Despite not being required for four years, Reidy hasn’t given up on adding to her seven international caps.

“It would be really cool to get back in, but on the other hand it’s out of your control. You can train really hard, but it comes down to other people to pick you.”

“Dane’s been really cool to talk to because he was kind of like I’m going to train and work really hard on my game and look what happened, it paid off for him, and that’s been quite an inspiration.”

In the meantime, Reidy is intent on doing her best for Dalefield and believed that if the team keeps improving, a spot in the final would be a realistic goal.

“The main thing is not to get too carried away – we’ve just got to take each game as it comes and just try to put our best performance out there.”