A former Rathkeale College student and Wairarapa cricket captain has joined the battle against Australia’s bushfires. 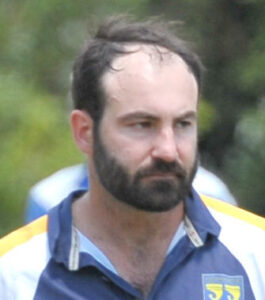 Henry Cameron, 34, has been pitching in to help his new home of Kangaroo Island, South Australia.

Two people have died in the blaze that continues to burn on the island which lies off the coast near Adelaide.

Since September, fires have claimed 28 lives across Australia.

Cameron has lived in the area for the past two years, having returned there after a spell as overseas professional for Dorking cricket club in England.

Now a personal trainer and cricketer, he has been battling the blaze near his fiancée Georgina’s family farm at Kangaroo Island.

“I just put my hand up to go and help them. As someone who’s not used to bushfires, from Wairarapa, it’s quite incredible how fast the bush burns when it gets a bit of a flame in it, and how far it can escalate.

“I felt a bit helpless. My initial thoughts were to do some fencing, put some stock fencing up, but it’s fair to say there wasn’t much of that going on. We are just trying to defend the farm.”

Cameron said the extent of the blaze was “shocking”, and that neighbours had lost “everything”.

“People have lost everything from their house, car, all their stock. There’s been some pretty horrific stories.”

The scale of the impacted area was significant.

“To put it in perspective, Kangaroo Island is a pretty similar size to Wairarapa. I worked out that there’s more than 210,000 hectares burned out. Which on a map, goes on a straight line from Castlepoint to Mt Bruce, from Mt Bruce down to Greytown, and Greytown across to Flat Point. That’s the sort of area that’s been burned so far.”

\He said the area he was living in was “a relative oasis”, but the battle was ongoing for friends and neighbours.

“I had no perspective on it until I was actually in there. Driving past hectares and hectares of burned trees and farms and dead animals.”

Cameron said the best way to help was to visit, once the fires had been subdued.

“If people can contribute to charity that’s important but also if anyone wants to do a holiday, don’t be afraid to visit these places, because they need a little bit of money injected back into the economy.

“People here are reliant on a, farming and b, tourism. It’s kind of a small New Zealand in that case. If people are going to stop going there, there’s going to be a lot of problems.”

The sentiment is shared across Australia.

West said it was important people still considered Australia as a place to go, and that tourism was an important show of support.

“From a local perspective, we’re a lovely place to visit. Tourism is very important so anybody shouldn’t be put off from coming to visit our lovely part of the world. We’ll welcome you with open arms.”

Visit: www.kangarooisland.sa.gov.au/community/kangaroo-island-bushfires-2020 for further information on how to donate and help.