Shelves cleaned out at Stirling Sports

Second raid in a week

In the small hours of Monday morning Stirling Sports Masterton was the victim of a ram raid theft which netted the perpetrators several thousand dollars-worth of clothing and caps.

A vehicle was driven on to the footpath on Queen St and through the shop front, shattering the front window.

The front bumper of the vehicle fell off and was left in the shop.

Owner Quinton Henderson got the call at around 2.30am from Amourguard security.

He was there within five minutes and police arrived not long after. 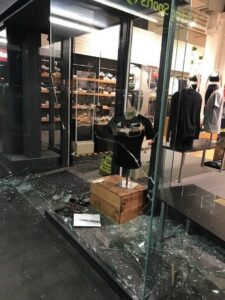 Henderson spent Monday morning dealing with the mess and talking with police and suppliers.

The thieves left with all the shop’s caps, some Rugby World Cup gear, and thousands of dollars of branded clothing.

Retail manager Jemma Puhara said when she came to work on Monday morning, the place was barricaded.

“Shattered glass was everywhere,” she said. “They made a mess. It was a nightmare to walk into.

“We had just started restocking for the new season, I feel upset for the boss.”

Henderson said it would take at least a week to get new stock and deal with the insurance matters.

“You hear of it once in a blue moon but now we have had two ram raids on Queen St a week apart – it is a worry,” Henderson said.

The Kathmandu Store was hit in similar fashion last week.

The vehicle used was a black people mover which was found abandoned close by.

Apparently, no items were taken on that occasion.

Detective Sergeant Matt Wasson said an investigation is under way.

Anyone with information about the Stirling Sports shop theft can contact Crime Stoppers [0800 555 111] or go to the Masterton Police Station.